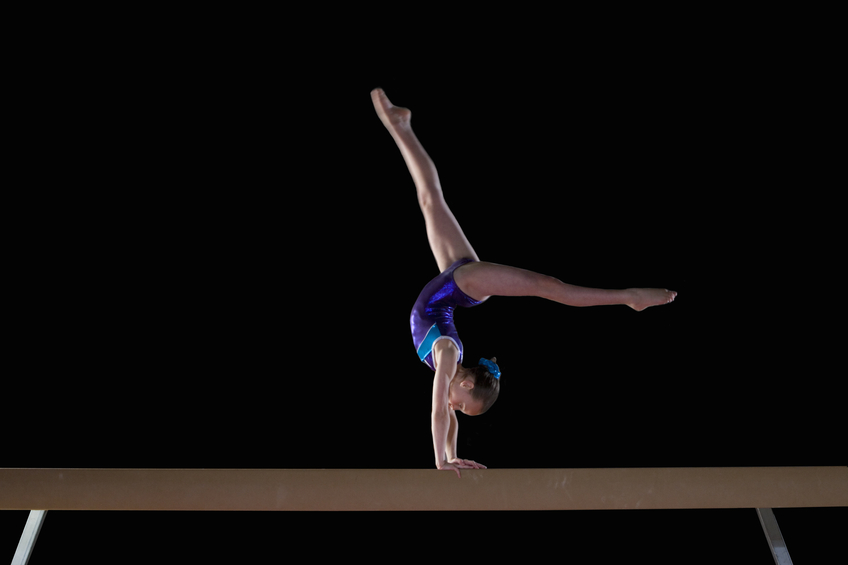 A gymnast on a balance beam.

A beam is a bar of metal or wood used to support a structure, such as a roof, and also a piece of wood mounted horizontally off the ground, used in gymnastics (also called a balance beam). A beam is the widest part of a ship, used in measurement, and informally, we use beam to talk about the width across somebody’s hips or buttocks. A beam is also a ray of light or radiation, as well as a radio signal. As a verb, to beam means ‘to send out in rays,’ and ‘to transmit a signal.’ To beam also means ‘to smile widely.’

on the beam: correct. Example: “All Nancy’s ideas are on the beam.”
off the beam, off-beam: wrong, incorrect. Example: “Tom works hard, but somehow, everything he produces is just a little off-beam.”
on your beam-ends: struggling financially. Example: “Elsa has lost her job and is on her beam-ends.”
a beam in your eye: a more serious failure or shortcoming in yourself than someone else. From the biblical quotation: “First cast the beam out of thine own eye; then thou shalt see clearly to cast the mote out of thy brother’s eye.” In other words, attend to your own faults, before finding fault in others.

A well-known use of the word beam was in the Star Trek TV series, where it was used to refer to teleportation from the ship to the planets the crew visited and back again. The most famous quotation from the series is “Beam me up, Scotty,” which is supposed to be a request for the character Scotty to return the person saying it to the ship. However, it is a misquotation, as the exact wording was never actually used in any of the Star Trek shows.

Check it out on this video!

Beam has been used in English since before the year 900. The Old English bēam, meaning ‘tree’ (the meaning of ‘post’ and ‘ray of light’ appeared in the 10th century) evolved into the Middle English beem, and later into beam. It is related to the Old Frisian bām, the Old Saxon bōm, the Dutch boom, the Old High German boum (Modern German Baum), the Gothic bagms and the Old Norse bathmr, all meaning ‘tree.’ The verb, meaning ‘to emit rays of light’ appeared in the early 15th century, and the figurative meaning (‘to smile,’ in the sense of emitting light from your face) is from the 19th century.

See full definition
Learn more about beam in our forums

Beam in other languages