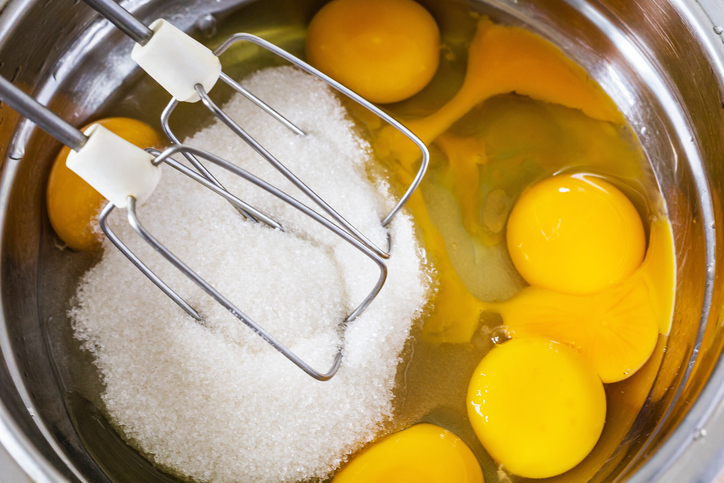 Beat the eggs with the sugar.

beat it: go away. Example: “The bartender told the drunk to beat it.”

beat up: injure someone by beating. Example: “The bullies beat Paul up and stole his lunch money.”

beat down: subdue, suppress. Example: “Deborah was terrified of flying, but determined to visit her daughter in Australia, so she beat down her fear and got on the plane anyway.”

beat the rap: be found not guilty of a criminal charge. Example: “Everyone knew Simon did it, but he hired an expensive lawyer and managed to beat the rap.”

The Michael Jackson song “Beat It” is a great example of the use of this expression to mean ‘go away.’ You can listen to the song and read the lyrics here:

The Beat Generation is the generation that came to maturity in the 1950s and was particularly marked by a rejection of Western values and political systems. More specifically, this name was given to a group of writers, most of whose work was published during the 1950s, and who rejected standard narrative values and explored themes of spirituality and also experimented with sex and drugs. Perhaps the most famous work from the Beat Generation was Jack Kerouac’s 1957 novel On The Road. It was Kerouac who popularized the term ‘Beat Generation.’ It seems to have had various meanings, starting with the idea that the generation was beaten down and tired out by the conventions and systems of the time, but Kerouac wanted it to mean ‘upbeat,’ which is another way of saying happy and positive, ‘beatific,’ which means ‘displaying great happiness and calmness,’ and also to be associated with the idea of the musical beat.

Beat dates back to before the year 900. The Old English verb bēatan (later the Middle English beten) meant ‘to inflict blows on or thrash someone.’ It comes from the Proto-Germanic verb bautan, and before then, from the Proto-Indo-European root bhau (to strike). It is related to the Old Norse bauta, the Middle Low German bōten, the Old High German bōzzan, all meaning ‘to beat,’ and the Middle Irish búalaim (I hit), as well as the English word batter. It is also loosely related to the Latin word fūstis, which means stick. It has been used to refer to the sound heard when the heart is pumping, as in the figurative sense, it was thought to be hitting the chest. The meaning ‘to overcome someone in a contest’ dates back to the early 17th century, while the meaning ‘to legally escape, avoid blame’ originated in American slang in the 1920s. The noun comes from the verb, and was first used to mean ‘a beating’ as well as ‘the beating of a drum’ around the year 1300. The musical sense only dates back to the mid-19th century, and alludes to the conductor moving the baton to keep time. Before that, beat had a different meaning in music: a grace note, meant to ornament, always half a note beneath the main note, so they sounded almost as one if you didn’t listen closely. The adjective comes from the verb as well and, meaning ‘defeated or overcome by effort,’ dates back to the early 15th century. The figurative meaning (tired or exhausted) is an extension of the former, and first appeared in the early 20th century in the US.

See full definition
Learn more about beat in our forums

Beat in other languages