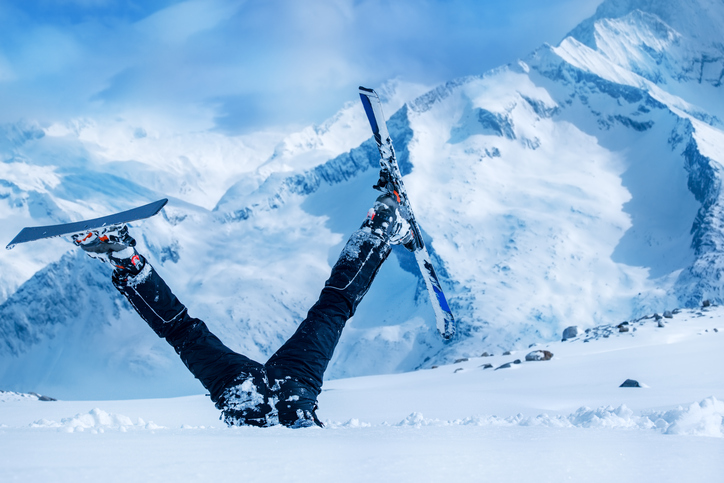 It looks like this skier has taken a tumble!

tumble dryer: an appliance that dries clothes by tumbling them inside a hot drum. Example: “I need those jeans dry so I can wear them to go out in an hour, so I’ll put them in the tumble dryer.” You can also use tumble-dry as a verb, meaning ‘to dry clothes in a tumble dryer.’

tumble to something (UK, AU, informal): to understand, realize. Example: “It was feeling a draught coming from under their son’s bedroom door that led Dan’s parents to finally tumble to the fact that he was sneaking out at night.”

There is a UK children’s television show called Something Special, featuring a character called Mr Tumble. Here is a clip from the show, where Mr Tumble sings Happy Birthday:

Tumbling is also the name for various acrobatic gymnastic moves, such as those you can see being demonstrated in this video clip:

Tumble dates back to the late 13th century. The Middle English verb tum(b)len meant ‘to dance in an acrobatic style,’ and also ‘to fall down,’ and was a frequentative (on other words, it describes repetitive movements) of the Middle English verb tomben, from the Old English tumbian (meaning to dance, tumble or leap). While the origin is unknown, linguists believe it is Germanic, and it is related to the Old Norse tumba, the Dutch tuimelen (to tumble), the Low German tummeln and Middle Low German tummelen (meaning to turn or dance), and the Old High German tūmōn and German taumeln “(o turn or reel). The transitive sense, ‘to cause something or someone to tumble’ dates back to the 14th century. The noun comes from the verb. When it first appeared in the mid-17th century, it meant ‘confusion or disorder,’ but the meaning we know today, ‘a fall, usually accidental,’ dates back to the early 18th century.

See full definition
Learn more about tumble in our forums

Tumble in other languages