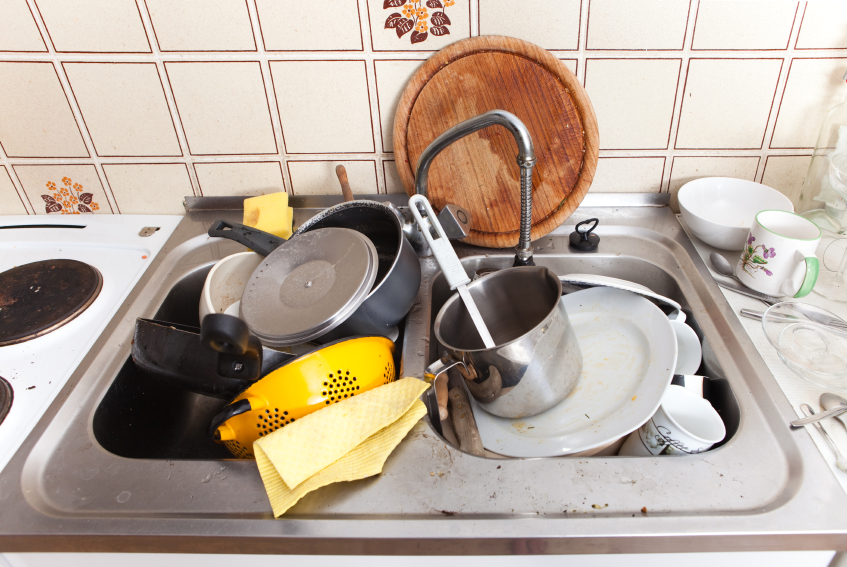 We need to do the dishes!

A dish is a plate for serving food and also the food contained in it, or a meal. Dishes, always in the plural, refers to all the plates, cups, and cutlery used when eating, as well as the pots and pans used to cook the food—in other words, everything that needs to be washed at the end of the meal. As a slang term, dish means ‘an attractive person.’ Informally, as a verb, dish means ‘to tell somebody the gossip about something.’

dish it out (informal): to criticize. Example: “Helen is always criticizing everyone, but she hates it if anyone says anything about what she does; she can dish it out, but she can’t take it!”

dish the dirt (informal): to divulge gossip about something. Example: “That journalist dished the dirt about the politician’s affair.”

do the dishes: wash all the plates, cutlery (forks, knives, spoons), and pots and pans after a meal (in UK English you can also say “wash up” or “do the washing up”). Example: “I always cook dinner, and my husband does the dishes.”

satellite dish: a dish-shaped antenna used for picking up satellite signals, often for satellite TV. Example: “Do you have cable TV or do you have a dish?”

Satellite dishes are most familiar to us as devices to receive satellite TV broadcasts. However, such dishes can also be used for receiving other signals. In the 1997 movie Contact, starring Jodie Foster, scientists are using large dishes to try to capture signals from space in the hope of finding evidence of alien life. You can see the movie trailer here:

The slang term dish, meaning an attractive person, has a related adjective dishy. So instead of saying someone is a dish, you might say that he or she is really dishy. Both terms are a little dated now, but you might still hear some people use them!

Dish dates back to before the year 900. The Old and Middle English noun disc means ‘a plate, bowl or platter.’ It can be traced back to the Latin discus (dish or platter or flat stone), the Greek diskos (disk or platter) and the Proto-Indo-European root deik– (to show). Dish is related to the Old High German tisc (plate), the German Tisch (table), the Italian desco (dinner table) and the French dais (canopy), as well as many English words, including addict, avenge, condition, contradict, dais, desk, dictate, dictionary, digit, disc or disk, index, indicate, judge, paradigm, preach, revenge, teach, toe, token and vendetta. The sense ‘a specific food or meal served’ dates back to the mid-15th century. A now rare slang use, ‘something that suits your taste,’ was first recorded in the early 20th century, and expanded to ‘an attractive woman’ in the 1920s (it has been used for both genders since the 1930s). The sense ‘a concave reflector or antenna’ was first used in the 1940s. The verb, meaning ‘to serve food in a dish or dishes,’ dates back to the late 14th century, and comes from the noun. It is related to the German tischen (to serve the table) and the Swedish diska (to wash dishes). The slang sense ‘to criticize’ first appeared in the 1940s, from the expression ‘to dish out punishment’ and later ‘to dish it out.’ This sense later evolved to mean ‘to gossip.’

See full definition
Learn more about dish in our forums

Dish in other languages