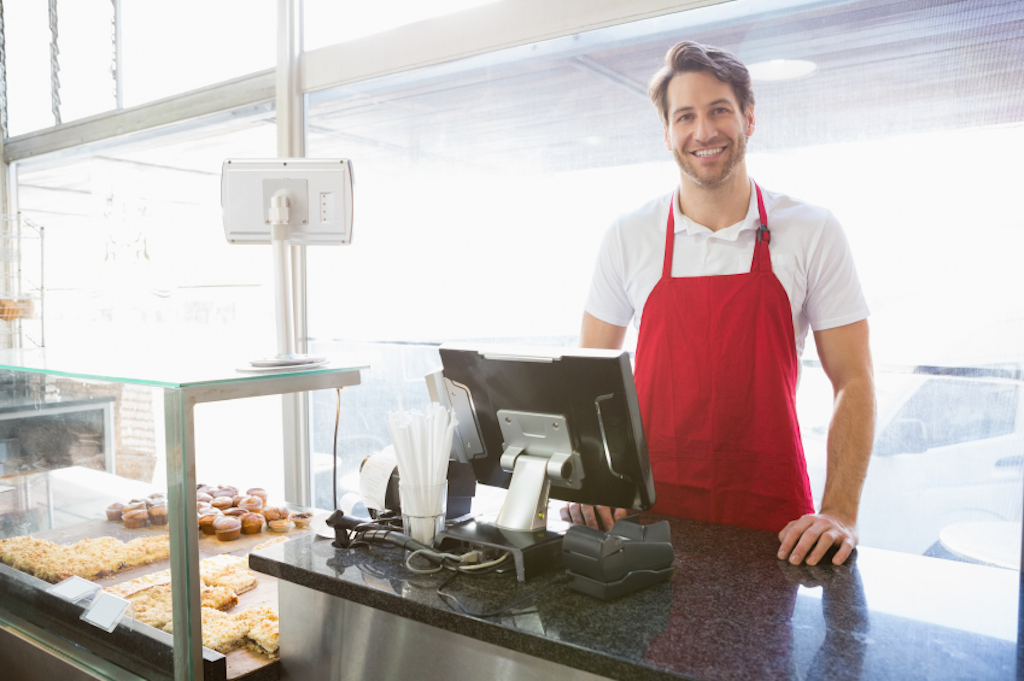 A man standing at a counter

As a noun, a counter is a flat surface found in stores or banks, where payment is taken or transactions are carried out. It is also a kind of long table or bar in a restaurant where customers can sit to eat, or, mainly in US English, the surface used for preparing food in kitchens (in the UK, this would more commonly be called a worktop). As an adverb, counter means ‘in the opposite direction’ or ‘in opposition’ and, as an adjective, it means ‘contrary or opposed to.’ As a verb, it means ‘to oppose’ or ‘to answer an attack with another one.’

Counter is also a prefix that means ‘contrary to’ and is found in words like counterattack, counterclockwise (US), counterbalance, and counteract. Most often, counter, as a prefix, is used without a hyphen, but some words can be spelled with a hyphen too, such as counter-attack or counter-revolution. If you are unsure whether to use a hyphen or not, check a dictionary.

Counter, meaning ‘a flat surface found in stores or banks,’ dates back to the mid-14th century, and originally meant ‘a table where a money lender does business.’ It came into English from the Anglo-French comptoir and the Old French contouer (‘counting room’ or ‘table or bench of a merchant or a bank‘). It can be traced back to the Medieval Latin computatorium (place of accounts), from the Latin computatus, the past participle of the verb computare (to count or sum up), from the prefix com– (with or together) and the verb putare (to reckon), and ultimately from the Proto-Indo-European root pau– (to cut, strike or stamp). Counter is related to the Latin pavire (to beat, ram or tread down), the Greek paiein (to strike), and the Lithuanian pjauti (to cut) and pjūklas (saw), as well as the English words account, amputation, berate, compute, computer, count, deputy, dispute, pavement, pit, rate and reputation. The main sense of counter expanded from just banks to shops in the 19th century, and then further, in the mid-19th century, to display cases in shops. The sense ‘flat kitchen surface’ was first used in the late 19th century. The expression over the counter dates back to the late 19th century, while under the counter, meaning ‘illegal payment,’ was first used in the 1920s. Counter, the verb meaning ‘to go against, come against or engage someone in combat,’ dates back to the late 14th century. It was originally short for acountren or encountren, and came into English from the Old French encontrer (‘to meet or come across’ or ‘to confront, fight or oppose’), from the noun encontre (a meeting, fight or opportunity), which derived from the adverb and preposition encontre (against or counter to). It can be traced back to the Late Latin incontra (in front of) from the Latin prefix in– and contra (against), which in turn is made up of the prefix com– (with or together) and the comparative particle tr, making it somewhat related to the other meaning of counter. Counter-, as a prefix meaning ‘against or in opposition’ as well as in return or corresponding,’ dates back to around the year 1300. It comes from the Anglo-French prefix countre-, from the same Latin source (contra) as the verb. The adverb, meaning ‘contrary, in opposition or in an opposite direction,’ comes from the prefix and dates back to the mid-15th century. The adjective, meaning ‘acting in opposition,’ dates back to the late 16th century. Linguists disagree on whether it evolved from the adverb or directly from the preposition.

See full definition
Learn more about counter in our forums

Counter in other languages