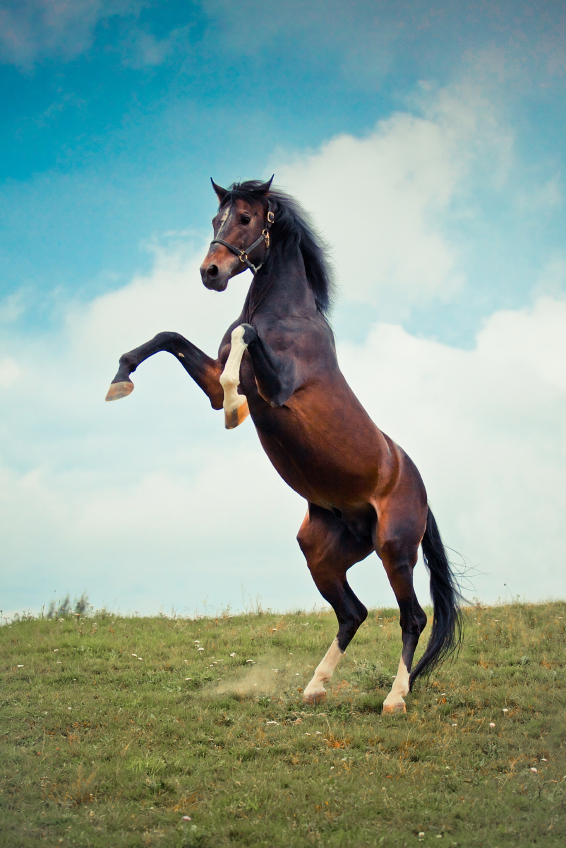 Horses sometimes rear if something scares them.

bring up the rear: be at the back of a group or procession. Example: ‘On the school trip, one teacher led the way, with another teacher bringing up the rear to make sure no one got lost.’

rear end: As a noun, this is a euphemism meaning ‘butt’ or ‘buttocks’ and can sometimes sound old-fashioned. Example: “My father is a pain in the rear end! He won’t stop telling me what to do!” As a verb and with a hyphen, to rear-end means ‘to drive into the back of another car.’ Example: “Someone rear-ended me when I was waiting at a red light, and I had to take my car to the shop to be fixed.”

rearview mirror: a mirror in a vehicle that allows you to see what’s happening behind you. Example: “Remember to check your rearview mirror before you pull away.”

Rear Window is the title of a 1954 Alfred Hitchcock movie. You can watch the movie trailer here:

Be careful not to confuse rear with rare. The spelling is very similar, but “rare” means ‘uncommon,’ ‘scarce,’ or ‘unusual.’

Rear, as an adjective meaning ‘in the back of something,’ dates back to around the year 1300. Its origin is uncertain. It came into English from the Old French rere or riere (behind), which can be traced back to the Latin retro (back or behind), from the prefix re– (back, against, anew or again), and ultimately from the Proto-Indo-European root wert– (to turn). As a noun, rear (meaning ‘hindmost part’) dates back to around the year 1600. Its origin is uncertain. Some linguists think it evolved from rerewarde (rearguard), which came into English from the Anglo-French rerewarde and the Old French rieregarde, made up of the adverb riere (see above). Others think it is more likely to have evolved as a shortened form of arrear (an adverb meaning ‘in or to the rear,’ ‘in the past’ or ‘at a disadvantage’), which came into English from the Anglo-French arrere and the Old French ariere (behind or backward), and can be traced back to the Vulgar Latin ad retro (from the same Latin origin as the adjective). Yet others think a combination of both origins may have happened. Rear has been used as a euphemism for buttocks since the late 18th century. The verb rear, originally meaning ‘to raise, build up, create or set on end,’ as well as ‘to arouse, excite or stir up,’ is much older. It dates back to before the year 900, as the Old English verb ræran (Middle English reren). It can be traced back to the Proto-Germanic raizijanau (to raise) and the Proto-Indo-European (h)rey-. Rear, in this sense, is related to the Old Norse risa, Old Saxon risan and Gothic urreisan (to rise), the Old High German risan (to rise or flow), the German reisen (to travel), the Scots rere (to construct, build or rear), and the Icelandic reisa (to raise), as well as the English word rise. The sense ‘to bring up’ (a child) was first used in the early 15th century, and applied to animals since the late 15th century. The sense ‘to rise on hind legs’ (a horse or similar animal) dates back to the late 14th century.

See full definition
Learn more about rear in our forums

Rear in other languages