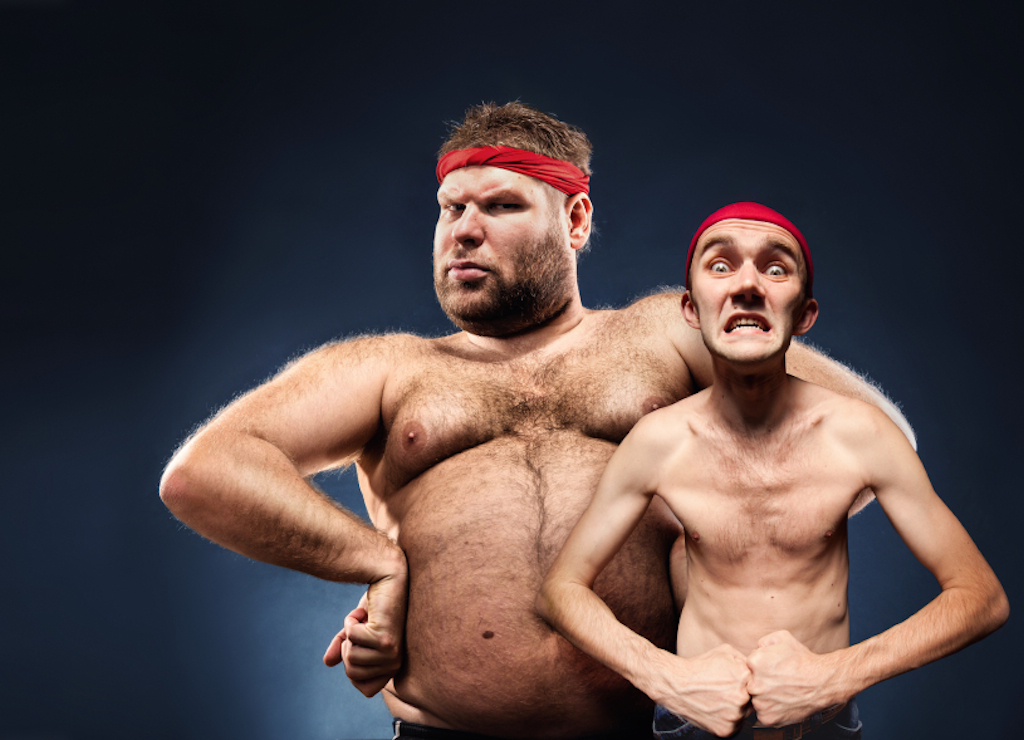 Thin is the opposite of fat.

thin on top: going bald. Example: “I saw my old boyfriend from school the other day; he’s really thin on top now. I bet he won’t have any hair left at all by the time he’s 35.”

The thin blue line is a term we sometimes use to talk about the forces of law and order, because the police wear blue uniforms, and the line they hold between order and the chaos of a lawless society. The Thin Blue Line is also the title of a 1990s TV comedy show, starring Rowan Atkinson. You can see a clip from the show here:

Thin air is literally the kind of air you get at high altitude, but figuratively, if someone or something appears out of thin air or disappears into thin air, it means that they seem to have come from nowhere or vanished without anyone knowing where they have gone. So, you might say, “I was walking along the road, when a ball appeared out of thin air and hit me on the head. Then a small child ran over and grabbed the ball. By the time I turned around, both the child and the ball had disappeared into thin air!”

Thin dates back to before the year 900, in the form of the Old English adjective þynne (thynne), which became thyn(ne) in Middle English. It can be traced back to the Proto-Germanic thunni (thin) and the Proto-Indo-European root ten– (to stretch). This in related to the West Frisian ten, the Middle Low German dunne, the Middle Dutch dunne, the Dutch dun, the Old High German dunni, the German dünn, the Old Norse þunnr (thunnr), the Swedish tunn and the Danish tynd (all meaning ‘thin’), as well as the Sanskrit tanoti (stretches or lasts) and tanuh (thin), the Persian tar (string), the Lithuanian tankus (compact), the Greek teinein (to stretch), tetanos (stiff or rigid) and tonos (string), the Latin tenere (to hold, grasp, keep, possess or maintain) and tenuis (thin, rare or fine), and English words such as abstain, attend, contain, continue, detention, entertain, extend, intend, maintain, monotony, obtain, pretend, rein, sustain, temple, tenant, tend, tender, tennis, tense, tent, tone and tonic. Since the beginning, thin has been used to mean ‘narrow, lean or not dense,’ ‘fluid,’ ‘tenuous’ or ‘weak or poor,’ as well as ‘loose or sparse’ and figuratively, ‘easily seen through.’ The verb, in the form of the Old English þynnian (thynnian) (Middle English thynnen) also dates back to before the year 900, but linguists are pretty sure that it comes from the adjective. It originally meant ‘to make thin, lessen or dilute,’ as well as ‘to become thin.’ The sense ‘to become less numerous’ was first used in mid-18th century, while ‘to become thinner’ dates back to the early 19th century.

See full definition
Learn more about thin in our forums

Thin in other languages