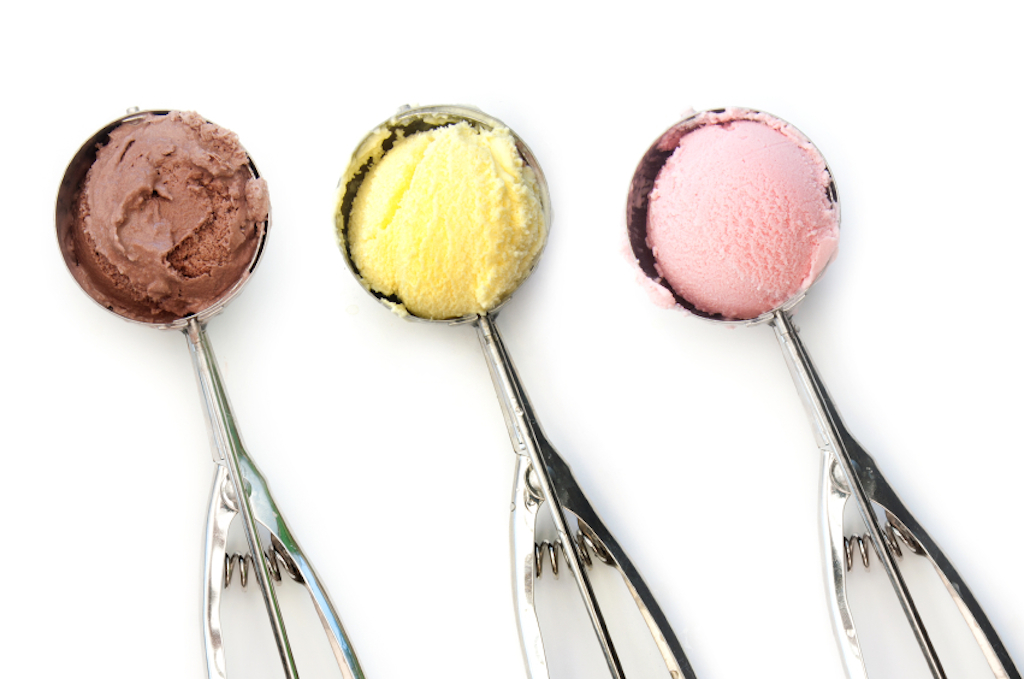 A scoop is a utensil that looks like a spoon but has a deeper bowl and is used for measuring ingredients and, most commonly, for serving ice cream. It is also the amount held by a scoop. As a verb, scoop means ‘to take out with a scoop.’ But a scoop is also an exclusive piece of information first published or broadcast by a particular media outlet, like a newspaper or TV news channel, and therefore to scoop means ‘to reveal information before your competitors.’ Informally, a scoop is any exciting piece of information or detail.

scoop up: to pick something up with a scoop or a scooping motion. Example: “When Charlie’s girlfriend called to say she was coming over, he quickly scooped his dirty laundry up off the floor and cleaned up his apartment.”

what’s the scoop? (US): what do you know? what’s happening? Example: “So, I heard you got an exclusive interview with a movie star. What’s the scoop?”

Scoop is the title of a 2006 Woody Allen movie. You can see the movie trailer here:

A scoop is also the big bucket of a steam shovel or similar machine.

Figuratively, to scoop can also mean ‘to win something’ especially a large amount or quantity of something. Examples: “The lucky couple scooped the jackpot of the lottery.” “The athlete scooped all the medals in the competition.”

Scoop dates back to the early 14th century. The noun, which originally meant ‘a utensil for bailing out,’ was spelled scope in Middle English (but pronounced scoop). It came into English from the Middle Dutch schōpe (a bucket for bailing water). It can be traced back to the West Germanic skopo, the Proto-Germanic root skop– and the Proto-Indo-European root (s)kep– (to cut, scrape or hack). It was probably also influenced by another Middle Dutch word: schoepe (a scoop or shovel). Scoop is related to the Middle Low German schope (ladle), as well as the Dutch schop (spade), the German Schüppe (‘shovel,’ as well as ‘a spade at cards’), the Gothic scaban (to dig), the Greek skaptein (to dig), the Old Church Slavonic skobli (scraper), the Lithuanian skabus (sharp) and skabėti (to cut), and English words such as scab, scabies, scrape and shave. The sense expanded to other utensils for measuring or pulling out in the mid-17th century, and the meaning ‘the action of scooping’ first appeared in the mid-18th century. The sense ‘the amount in a scoop’ dates back to the early 19th century, while the figurative sense, ‘a big haul,’ is from the late 19th century. The journalism sense was first used in the US in the mid-19th century. The verb dates back to the mid-14th century, and originally meant ‘to bail out.’ It comes from the noun, but was also influenced by the Low German scheppen (to draw water), so in addition to the origin above, it can be traced back to the Proto-Germanic skuppon and the Proto-Indo-European root skeubh-. It is, therefore, also related to the Old Saxon skeppian, the Dutch scheppen, the Old High German scaphan and the German schöpfen (to scoop, ladle out), the Old Saxon skufla (shovel), and the English words shove and shovel. The journalistic sense appeared in the late 19th century.

See full definition
Learn more about scoop in our forums

Scoop in other languages