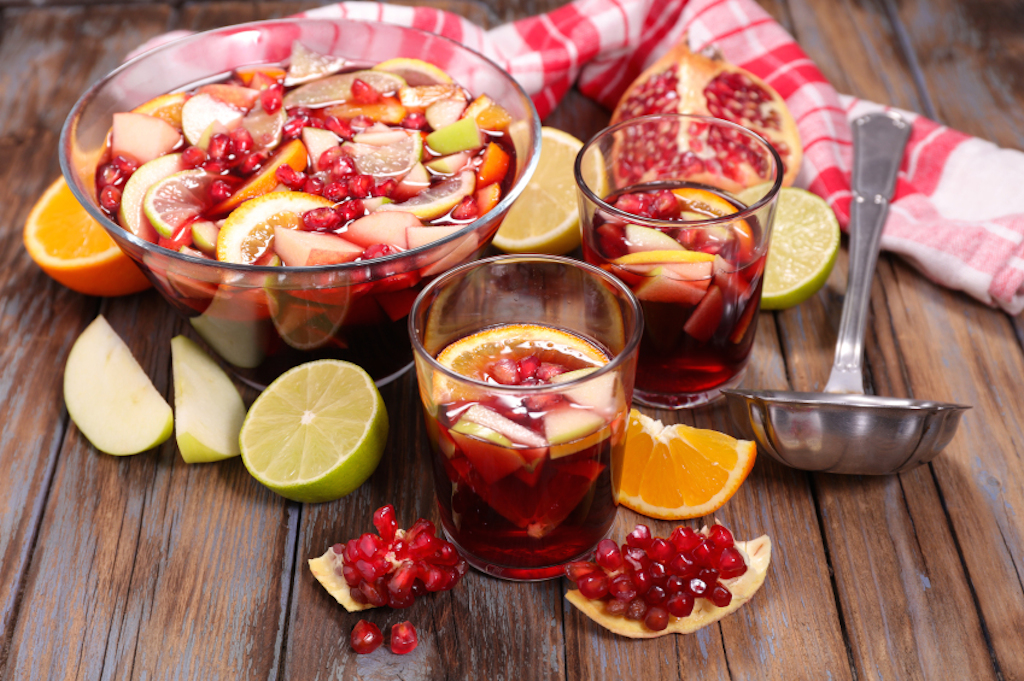 Punch is a popular drink at parties.

A punch is, most commonly, a hard hit with the fist, and it can also be the power or impact of something. As a verb, to punch means ‘to hit hard with the fist’ or ‘to press a key or button on a machine.’ A punch is also a machine for making holes in paper or other materials and, as a verb, it means ‘to make holes with a punch.’

not pull any punches: be very forthright, or honest, without trying to soften the impact of your words or actions. Example: “Wow, you didn’t pull any punches in that meeting; you told the board exactly what you thought!”

punch-up (UK): a fight, especially a disorderly one. Example: “The customers in the bar had had too much to drink and a silly argument quickly turned into a punch up.”

punch above your weight: to do something that seems beyond your abilities. Example: “Really? You’ve been promoted to head of department? Are you sure you aren’t punching above your weight?” This expression is also often used to suggest that a person’s partner is significantly more attractive than him/her. Example: “Have you seen Jim’s new girlfriend? She’s gorgeous and she has a PhD; I reckon he’s punching above his weight there!”

punch in, punch out: to register the time of your arrival at or departure from your workplace. Originally used because people literally punched a card when they arrived or left, now used more generally, regardless of the recording method. Example: “Tina works long hours; she punches in at 8 am every day and normally punches out at 6 or 7 pm.” We can also say “clock in” or “clock out.”

Punch-Drunk Love is the title of a 2002 movie. You can see the trailer here:

Punch is also a drink made from a mixture of other drinks with fruit, sugar, and spices. In the US this is usually nonalcoholic and is served at school dances, but in the UK it normally has alcohol in it. However, this is not the origin of the adjective “punch-drunk,” used to refer to someone who seems dazed or confused. Originally this term came from boxing, where fighters can sometimes develop the symptoms of becoming dazed or stupefied because of taking so many punches to the head during their boxing careers.

Punch, meaning ‘a pointed tool for making holes,’ dates back to the late 14th century. It was short for puncheon (from the mid-14th century), which came into English from the Old French noun ponchon or ponchion (a pointed tool or piercing weapon). It can be traced back to the Vulgar Latin punctionem (pointed tool), from the Latin verb pungere (to prick, pierce or sting), and the Proto-Indo-European root peuk (to prick). Punch is related to the Greek pyx (with clenched fist), pygme (fist or boxing) and pyktes (boxer), as well as the Latin pugnare (to fight), and to English words such as appointment, bung, expunge, pink, poignant, point, pounce, punctual, punctuation, pungent, repugnant and even Pygmy. The sense ‘a stab or thrust’ was first used in the mid-15th century, while ‘a machine for pressing or stamping,’ dates back to the early 17th century. As a verb meaning ‘to thrust, jostle or push,’ as well as ‘to prod or drive (cattle) by punching or prodding,’ punch also dates back to the late 14th century, as the Middle English verb punchen. It came into English from the Old French ponchonner (to punch, prick or stamp), from the ponchon. The sense ‘to pierce with a tool’ was first used in the early 15th century, while ‘to stab or puncture’ is from the mid-15th century. The sense ‘to hit with a fist’ dates back to the early 16th century. The noun, meaning ‘a hit with a fist,’ dates back to the mid-16th century, and comes from this sense of the verb. While most linguists believe this noun evolved from the verb, which in turn is a sense of the older verb, some think both may have evolved from pounce (Middle English noun pownce), which originally meant ‘the claw of a bird of prey,’ and came from the Old French ponchon, making them all related in either case. Finally, punch, meaning ‘a mixed drink,’ dates back to the early 17th century, and is probably unrelated to the other meanings. It can be traced back to the Hindi word panch (five), a reference to the number of original ingredients, which were spirits, water, lemon juice, sugar and spice. It can be traced back to the Sanskrit panchan-s, from panca (five), and the Proto-Indo-European root penkwe– (five). It is related to the Greek pente, the Latin quinque, the Old Church Slavonic pęti, the Lithuanian penki, the Old Welsh pimp, the Old English fif, the Dutch vijf, and the Old High German and German funf (all meaning five), as well as the English words five, fifteen, fifty, finger, fist, pentacle, pentagram and quintet, among others.

See full definition
Learn more about punch in our forums

Punch in other languages