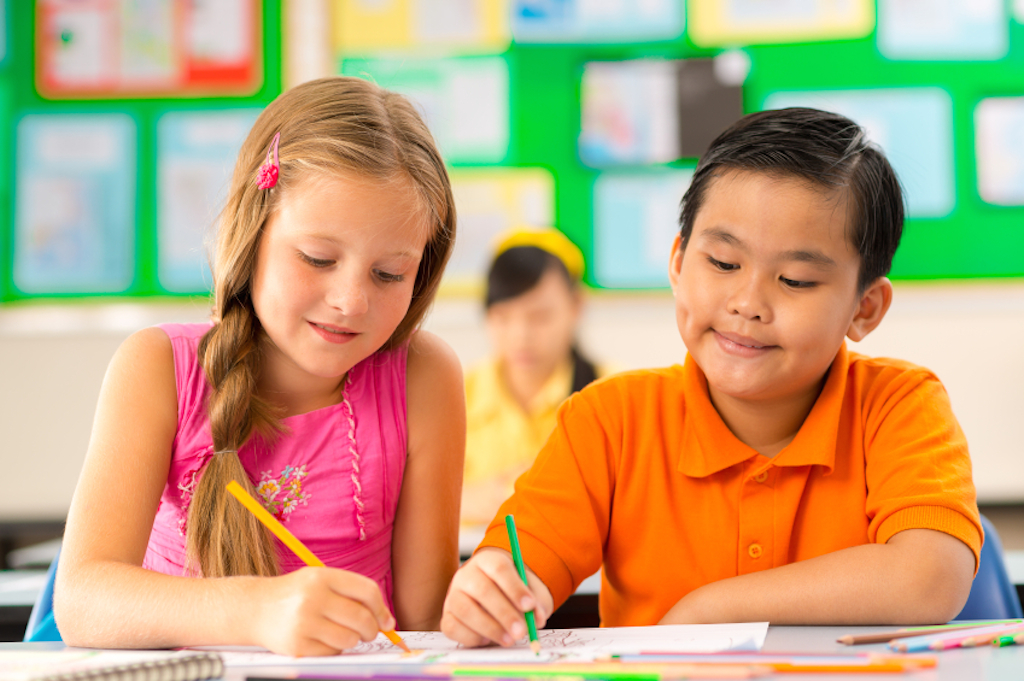 Mark and Ally are peers in Mrs. Mariano's class.

A peer is someone with the same legal status, or someone of the same age, abilities, and social status as you. However, the verb peer has a completely unrelated meaning. To peer means’ to look intently,’ as in the effort to see clearly, or ‘to appear partially,’ normally used of the sun or a light, or ‘to protrude slightly.’

peer pressure: pressure put on you by others like you; teenagers are particularly vulnerable to this. Example: “Peer pressure often means teenagers think they need to have the latest phones and gadgets.”

peer group: the people around you who are of the same age, abilities, and social status as you. Example: “Children often behave differently with their peer group than with their parents.”

In Great Britain and Ireland, a peer is a member of any of the five degrees of the nobility (duke, marquis, earl, viscount, and baron).

Because peer means someone like you, if you say of someone or something that he/she/it is without peer, that means there is nothing else quite like that person or thing. Example: “In the field of astrophysics, that professor is without peer!” This can also be expressed by the related adjective peerless.

Peer, meaning ‘an equal in rank or status,’ dates back to the late 13th century, though some linguists set that date a bit earlier, to the late 12th century, as the word was already in use in the British Isles in Anglo-Latin before being fully absorbed into the English language as the Middle English noun per. It came into English from the Anglo-French pair and the Old French per, which can be traced back to the Latin par (equal) and the Proto-Indo-European root pere– (to grant or allot), though of course it was also influenced by the term’s wide use in Anglo-Latin. Peer is related to the English words par and pair, among others. The sense ‘a member of the nobility’ was first used in the late 14th century, while the sociological sense, ‘of the same social or age group,’ dates back to the 1940s. The expression peer pressure first appeared in the 1970s. The verb peer, meaning ‘to look closely,’ is unrelated. It dates back to the late 16th century, and developed as a variant of the Middle English verb pīren (to look closely), from the 14th century. Its origin is uncertain, but it may have come from, or at least was related to, the Old Frisian piren. Both the form and the sense of the verb were influenced by another verb, the Middle English peren, a short form of aperen (to appear or come into view) from the late 14th century. Peren came into English from the Old French aparoir or aperer, from the Latin apparere (to appear, come into sight or make an appearance). Peer, in this sense, is related to the French apparoir and the Spanish aparecer (to appear), as well as the English words appear, appearance and disappear, among others.

See full definition
Learn more about peer in our forums

Peer in other languages