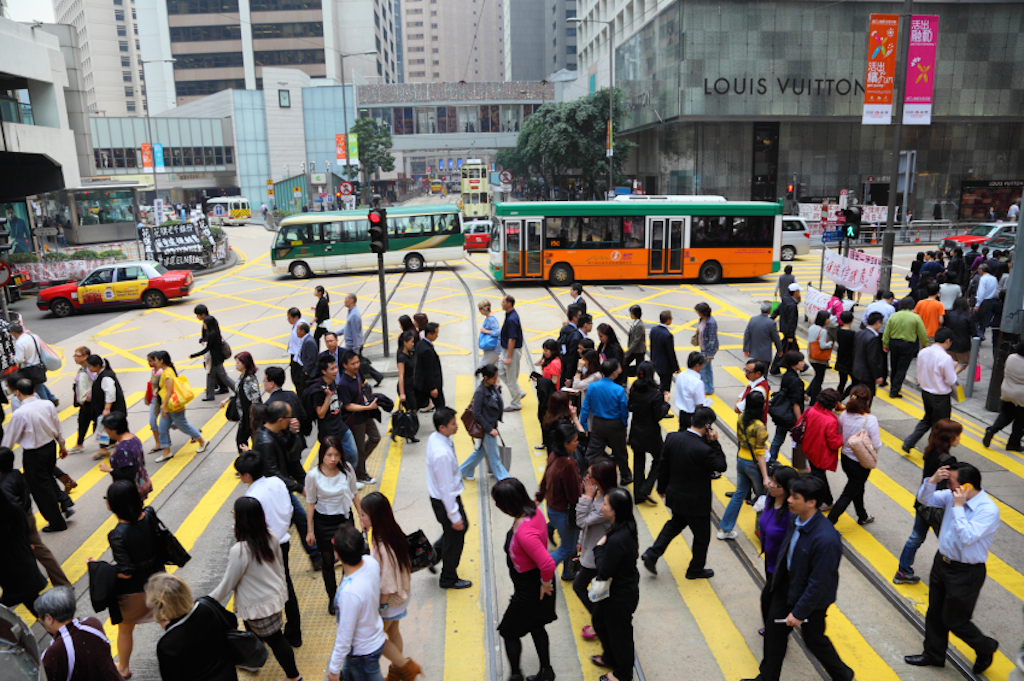 Cities can be great places if you like hustle and bustle.

As a verb, hustle means ‘to move or cause to move in a hurry’ and also ‘to work very quickly.’ It also means ‘to use aggressive methods to persuade people to do something’ and, in a more general sense, ‘to be aggressively energetic to obtain something.’ In US English, it means ‘to promote or sell something aggressively.’ As a slang term, hustle means ‘to earn money by illegal means.’ As a noun, hustle is any energetic activity or discourteous shoving. Informally, it’s a scheme to trick somebody out of money.

hustle and bustle: busyness, energetic activity. Example: “Ben grew up in the countryside, but now that he’s an adult, he prefers the hustle and bustle of the big city.”

Watch the trailer for the 2013 movie American Hustle here:

One of the earliest meanings of hustle is ‘to push or knock somebody around’ and, in particular, it is a method of robbing people by pushing and shoving them, while taking their valuables. This explains why hustle now has meanings relating both to lots of activity and to making money through illicit means.

Hustle, originally meaning ‘to shake to and fro,’ dates back to the late 17th century. It came into English from the Dutch hutselen or husseln (to shake or toss), a frequetative of husten, which is a variant of hosten (to shake). While its precise origin is uncertain, the stems hut– and hot– were frequent in Germanic languages, making it very likely that it came into English from a Germanic source. The sense ‘to shove or push roughly‘ first appeared in the mid-18th century, while ‘to bustle,’ ‘work busily’ and ‘move quickly’ date back to the early 19th century. The colloquial sense ‘to get something quickly in an illegal way’ was first used in US English in the mid-19th century. The noun, which originally meant ‘a shaking together,’ dates back to the mid-18th century, and comes from the verb. The senses ‘pushing or shoving,’ as well as ‘bustling activity,’ date back to the late 19th century, and were first used in US English. The sense ‘an illegal business activity or swindle’ is from the 1960s, and was originally US slang.

See full definition
Learn more about hustle in our forums

Hustle in other languages