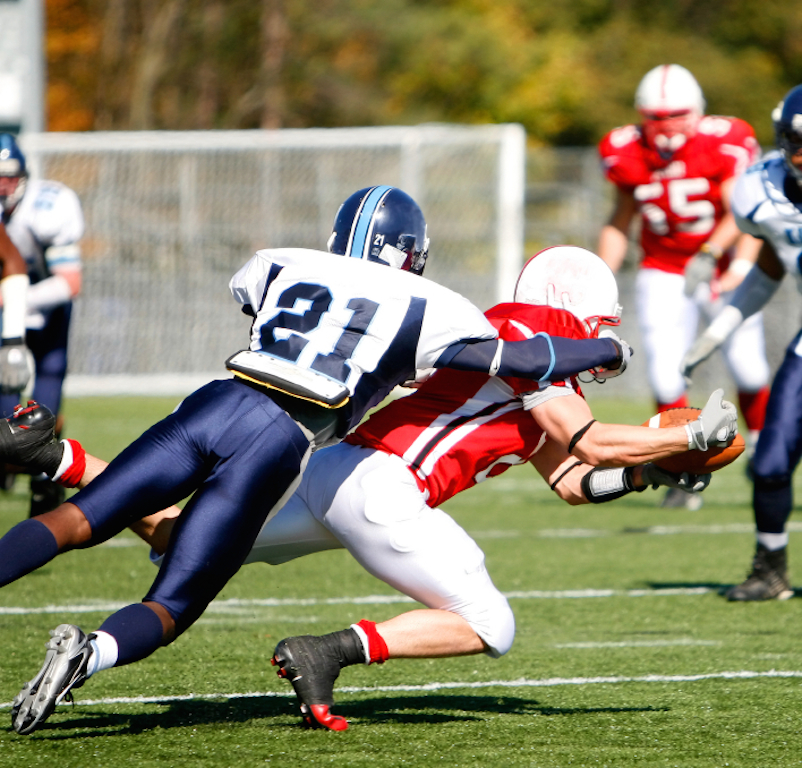 A football player tackling his opponent

As a verb, tackle means ‘to start working or being able to work on a hard and difficult issue or problem’ or ‘to deal with a difficult person.’ In sports, like rugby or American football, it means ‘to force a player to the ground.’ As a noun, a tackle is the act of tackling someone, as is done in sports, and also a player’s position in American football. Tackle is also any system that uses pulleys or ropes to lift or lower objects. As an uncountable noun, it is the equipment used for fishing.

tackle somebody to the ground: in contact sports, a player may try to get the ball by taking hold of an opponent and wrestling him/her to the ground. This expression is also used to describe someone being wrestled to the ground when no ball is involved, for instance, to prevent that person carrying out an unwanted act. Example: “The police officer tackled the robber to the ground and put handcuffs on her.”

Listen to Joni Mitchell singing “Hana” here. Listen out for the lyric “You’ve got to be braver than that, You tackle the beast alone.”

When used to talk about starting to work on a problem or issue, tackle is synonymous with deal with. It is different from solve because tackling an issue means you are trying to find a solution, not that you have found one or even necessarily that you will.

Tackle, meaning ‘apparatus or gear (especially the rigging of a ship),’ dates back to the mid-13th century, as the Middle English noun takel. It came into English from the Middle Dutch or Middle Low German takel (the rigging of a ship), though its origin before then is uncertain. Many linguists think it came from (or at the very least was influenced by) the same root as tack (clasp, hook or fastener), which would also make it related to the English word take, which is also uncertain, but probably Germanic. It may also be related to the Middle Dutch verb taken (to grab or seize). The sense ‘gear for fishing’ was first used in the late 14th century, while ‘device for grabbing and shifting something’ is from the early 16th century. ‘The act of tackling,’ in the sports sense, comes from the same sense of the verb, and was first used in the late 19th century. The verb, originally meaning ‘to entangle or involve,’ dates back to the mid-14th century, and comes from the noun. The sense ‘to furnish a ship with tackles’ was first used around the year 1400, while ‘to harness a horse’ is from the early 18th century. The senses we are more familiar with today, ‘to lay hold of,’ ‘to come to grips with’ and ‘to attack’ all date back to the early 19th century, while the figurative sense ‘to try to deal with (a problem)’ is from the mid-19th century. The sports sense, ‘to seize and stop someone’ was first used in the mid-19th century.

See full definition
Learn more about tackle in our forums

Tackle in other languages