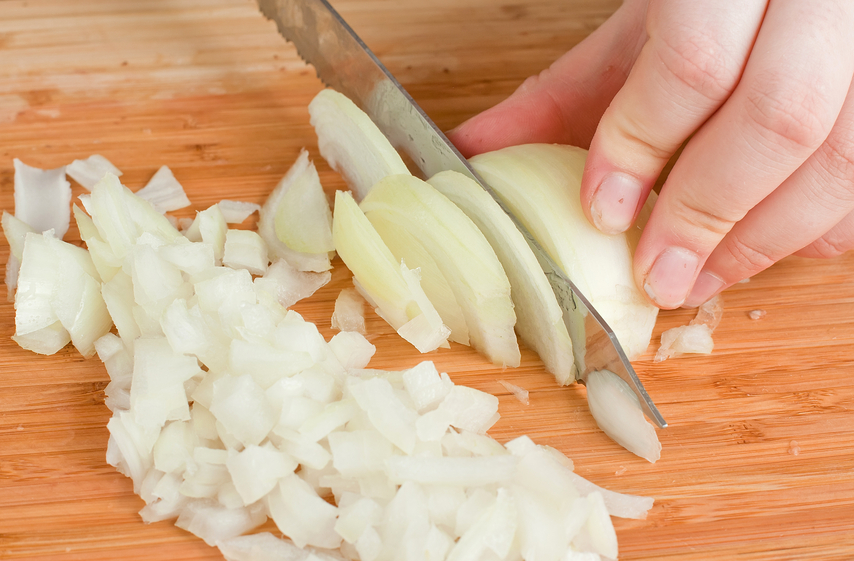 Most commonly, to chop means ‘to cut something with quick and sharp blows,’ ‘to hit with a heavy and sharp stroke,’ or ‘to cut into smaller pieces’; in this latter sense, it is often followed by up. Figuratively, chop means ‘to reduce something severely.’ A chop is not only the act of chopping, but also a thick individual piece of meat, usually including a rib. In North America, chop is also an uncountable noun and means ground grains used as animal food.

the chop (UK): dismissal from a job. Example: “Wendy had only had her job for two months when she got the chop.”

chop and change (UK): change your mind frequently. Example: “I don’t know what George wants; I’ve asked him, but he keeps chopping and changing!”

chop shop: a place where people take stolen cars to sell their parts. “My car was stolen two days ago. I’m sure it’s in the chop shop by now.”

In the plural, chops can also mean ‘the jaw’ or ‘the area around the mouth,’ and it has several figurative meanings. For instance, you might say a person or animal who is eagerly anticipating food is licking his/her chops. Mainly in US English, the expression bust your chops means ‘to work very hard.’ Example: “We’ve been busting our chops all week and the work still isn’t finished!” If you bust someone else’s chops (again, mainly US English), that means you give that person a hard time. Example: “The boss has been busting my chops for months now about my sales targets, but I just can’t do any better.”

Chop, meaning ‘to cut with a quick strike,’ dates back to the mid-14th century, in the form of the Middle English verb choppen or chappen. Its exact origin is uncertain, but some linguists think it evolved from an unrecorded Old English verb that could possibly be ceappina or cieppan, from the Proto-Germanic root kapp– (to chop, cut or split). If this is the origin, chop is related to the Frisian kappe or kapje (to hack, chop or lop off), the Dutch kappen (to chop, cut or hew), Middle Low German koppen (to cut off, lop or poll), the Low German kappen (to cut off or clip), the German kappen (to cut or clip), the Danish kappe (to cut, lop off or poll), the Swedish kapa (to cut), the Albanian copë (piece or chunk), and the English word chip. Other linguists have suggested that it came into English from the North French choper (or the Old French coper), meaning ‘to cut or cut off.’ If that is the case, it can be traced back to the Vulgar Latin cuppare (to behead), influenced (in Old French) by the similar verb couper (to strike). It’s possible the Latin borrowed the word, or at least the root, from a Germanic language, so it can be traced back to the same origin as the competing theory. If chop came into English from Old French, it is related to the French couper, and the English word coup. The noun, meaning ‘the act of chopping with a quick strike,’ also dates back to the mid-14th century, and comes from the verb. The sense ‘a piece cut off from something’ was first used in the mid-16th century, and specifically used to refer to a slice of meat since the early 17th century. The sense ‘a blow or strike’ dates back to the mid-16th century.

See full definition
Learn more about chop in our forums

Chop in other languages