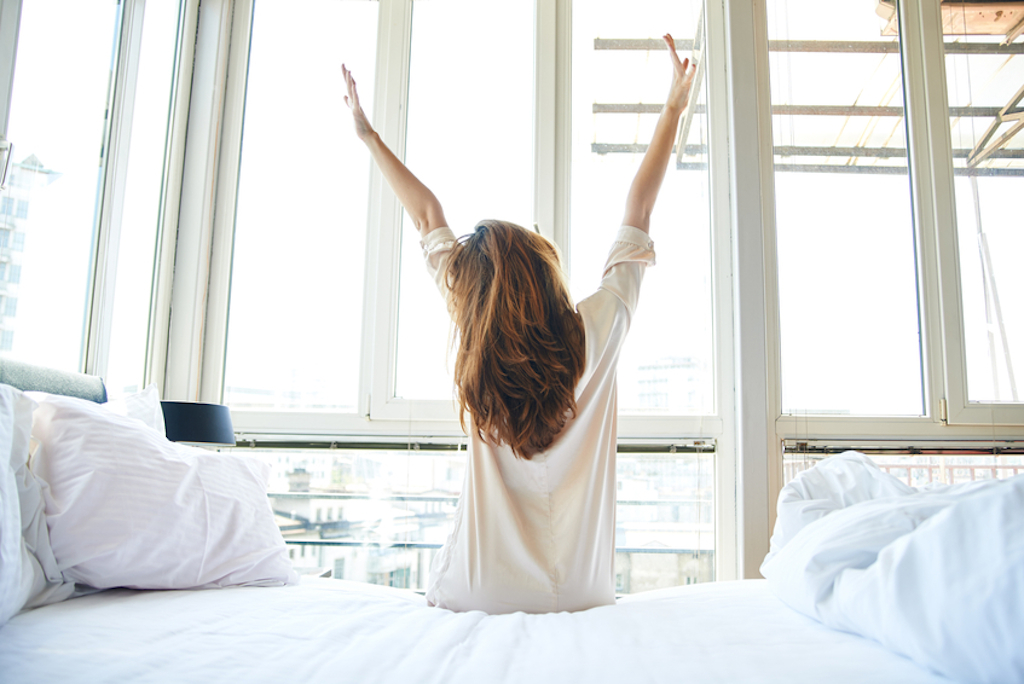 To wake means, as you probably already know, ‘to stop sleeping’ or ‘to make someone stop sleeping,’ and it also means ‘to become aware of something.’ In these senses, wake is often followed by the adverb up. It also means ‘to cause to come to life.’ As a noun, a wake is a vigil by a dead body before the burial. A wake is also the track of waves left by a boat when sailing and, figuratively, the path of something that has passed or gone by.

in the wake of: following, as a result of. Example: “In the wake of recent events, the company directors have decided to draw up a new business plan.”

Death at a Funeral is the title of a 2007 movie where all the action takes place at a wake. You can watch the trailer here:

In the past decade, the word woke (the past tense of the verb, but used here as a past participle or adjective) has become popular in the sense of becoming more politically and socially aware, especially in the US. Example: “Some woke students confronted the mayor about pollution in the lake.”

Wake dates back to before the year 900, in the form of not one but three Old English verbs: wacan (‘to wake,’ as well as ‘to be born, arise or originate’), wacian (to be or stay awake) and weccan (‘to wake someone’ or, figuratively, ‘to give rise or origin to something’). All can be traced back to the Proto-Germanic wakjanan and the Proto-Indo-European root weg– (to be strong or lively). Wake is related to the Old Saxon wakon, the Old Norse vaka, the Danish vaage, the Old Frisian waka, the Dutch waken, the Old High German wahhen and the German wachen (all meaning ‘to be awake’), the Gothic wakan (to watch), the Old High German wahta (watch or vigil), the Middle Dutch wachten (to watch or guard), the Sanskrit vajah (force or strength), the Latin vigil (watchful or awake), vigere (to be lively or thrive), velox (fast or lively) and vigor (liveliness or activity), as well as English words such as bewitch, reveille, surveillance, vedette, vegetable, velocity, vigil, vigilant, vigor, waft, wait, watch, wicked and witch. By Middle English, wacan (to wake) and wacian (to stay awake) had merged into waken, while the transitive form, weccan (to wake someone), became wecchen. The sense ‘to wake someone’ finally merged into waken around the year 1300. All the figurative senses have been around since before the year 900, except ‘to become aware,’ which dates back to the mid-20th century, especially in the expression “wake up and smell the coffee.” The use of woke for political awareness dates back to around 2010. The noun, meaning ‘a state of wakefulness,’ also dates back to before the year 900, in the form of the Old English wacu (found in compounds like ‘nihtwaku,’ or ‘nightwatch‘), which was influenced by the Old Norse vaka (‘a vigil’ or ‘the night before a feast,’ as well as ‘to be awake’ as a verb’), from the same PIE root as the verb. The meaning ‘a vigil for a dead body’ appeared in the early 15th century, shortened from lichwake (14th century). The other noun sense, ‘the track left by a moving ship,’ dates back to the mid-16th century. Its origin is uncertain. It could have come into English from the Middle Low German or Middle Dutch wake (hole in the ice), from the Old Norse vök or vaka (hole in the ice), or from a later borrowing of another Scandinavian source. In any case, it can probably be traced back to the Proto-Germanic wakwo. The figurative sense, ‘the path of something that has gone past,’ and the expression “in the wake of” (meaning ‘as a result of’), both date back to the early 19th century.

See full definition
Learn more about wake in our forums

Wake in other languages