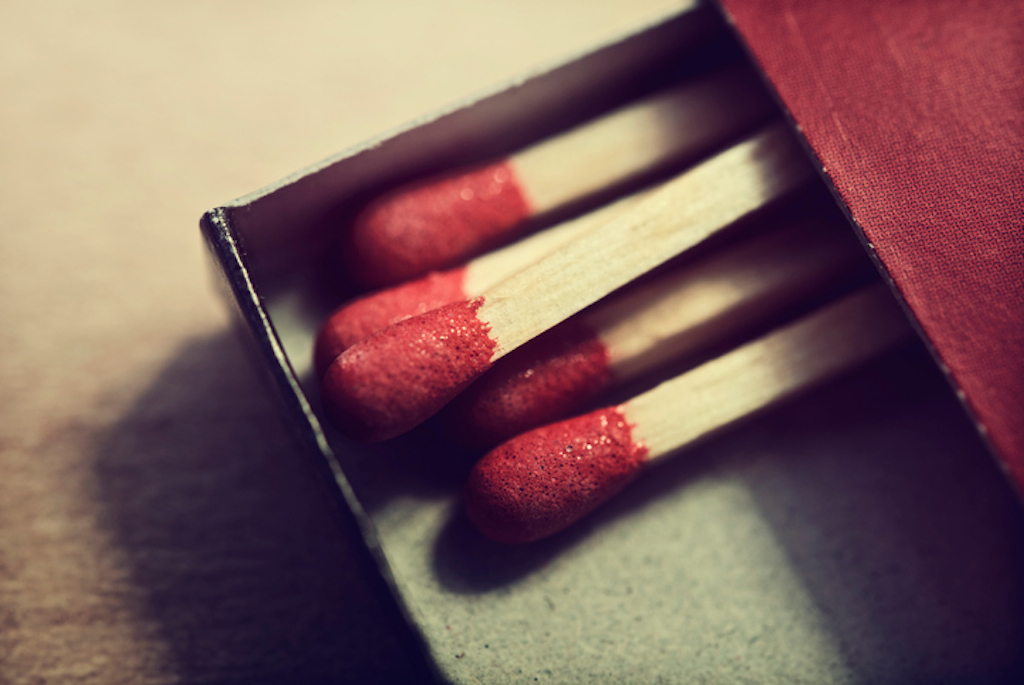 A box of matches

A match is a thin piece of wood with a chemical substance in its tip that produces fire when rubbed against a surface. A match is also a person or a thing that resembles or equals another in some way. It can also be someone that can cope with or treat someone or something else as an equal. In addition, a match is one of a corresponding pair and, in sports, a match is a competition between two teams. As a verb, to match means ‘to equal or be equal’ or ‘to correspond to something or someone.’ Match also means ‘to fit together’ or ‘to be equal.’

meet your match: encounter someone who is your equal or, perhaps, better than you. Example: “Mark always likes to think he is smarter than everyone else, but the new guy is really clever; I think Mark has met his match!”

match up to: be equal to, be good enough for. Example: “Thank you for giving me the job; I hope I will be able to match up to your expectations.”

In tennis, a match point is a point that will win the player the match. Match Point is also the title of a 2005 movie, and you can watch the trailer here:

In the UK, when we talk about sports, the words match and game are synonymous, except that a match always has a competitive element to it, whereas a game might be something just played between friends for fun, with no one really keeping score. In the US it is much more common to say game for most sports. For example, in the US we go to football and baseball games, and in the UK there are football and cricket matches. However, people in the US do use match for some sports, like tennis (eg, “Venus and Serena Williams lost an early doubles match at the Olympics.”).

Match, meaning ‘one of a pair’ or ‘an equal,’ dates back to before the year 1000, as the Old English mæcca (Middle English macche), meaning ‘a companion or mate,’ ‘one of a pair,’ ‘husband or wife,’ ”one suited to another’ or ‘an equal.’ It can be traced back to the Proto-Germanic ‘gamakon (fitting well together), from the Proto-Indo-European root mag– or mak– (to knead, fashion or fit). Match is related to the Old Saxon gimaco (fellow or equal), the Old High German gimah (comfort or ease), the Middle High German gemach (comfortable or quiet), the German gemach (easy or leisurely), the Greek magis (kneaded mass or cake) and mageus (person who kneads or baker), the Latin macerāre (to soften, make soft, soak or steep), the Lithuanian minkyti (to knead) the Old Church Slavonic mazo (to anoint or smear), the Breton meza (to knead), the German machen (to make) and the Middle Irish maistir (to churn), as well as the English words amass, among, macerate, magma, make, mason, mass, mingle and mongrel. The sense ‘a person or thing that resembles or equals another’ appeared around the year 1400, while the sports sense ‘contest’ dates back to the mid-16th century. The sense ‘a marriage agreement’ was first used in the late 16th century. The verb, meaning ‘to be able to compete with an adequate opponent,’ dates back to the mid-14th century, as the Middle English verb macchen, and comes from the noun. The sense ‘to join together’ (in marriage) appeared in the late 14th century, and soon expanded to other forms of joining. The sense ‘to be equal to’ was first used in the late 16th century. The other noun form of match, originally meaning ‘the wick of a lamp,’ is unrelated. It first appeared in the late 14th century, as the Middle English macche. It came into English from the Middle French meiche, and it can be traced back to the Vulgar Latin micca, miccia or mesca. Its origin is uncertain, but linguists think it probably came from the Latin myxa (wick of a lamp), from the Ancient Greek mýxa, meaning ‘mucus,’ and figuratively, ‘the wick or nozzle of a lamp.’ Ultimately, it can be traced back to the Proto-Indo-European root meug– (slimy or slippery). Match is related to the Catalan metxa, the Spanish mecha and the Italian miccia (all meaning ‘wick’), as well as the Latin emungere (to sneeze out or blow your nose) and mucere (to be moldy or musty), the Greek myssesthai (to blow your nose), the Sanskrit muncati (he releases), and of course the English word mucus. The meaning ‘a piece of cloth, cord or wood soaked in a substance (usually sulfur) used to light candles or lamps’ appeared in the early 16th century. Matches, as we know them, were first sold in the early 19th century, and the other senses of the noun disappeared as this became the dominant meaning.

See full definition
Learn more about match in our forums

Match in other languages