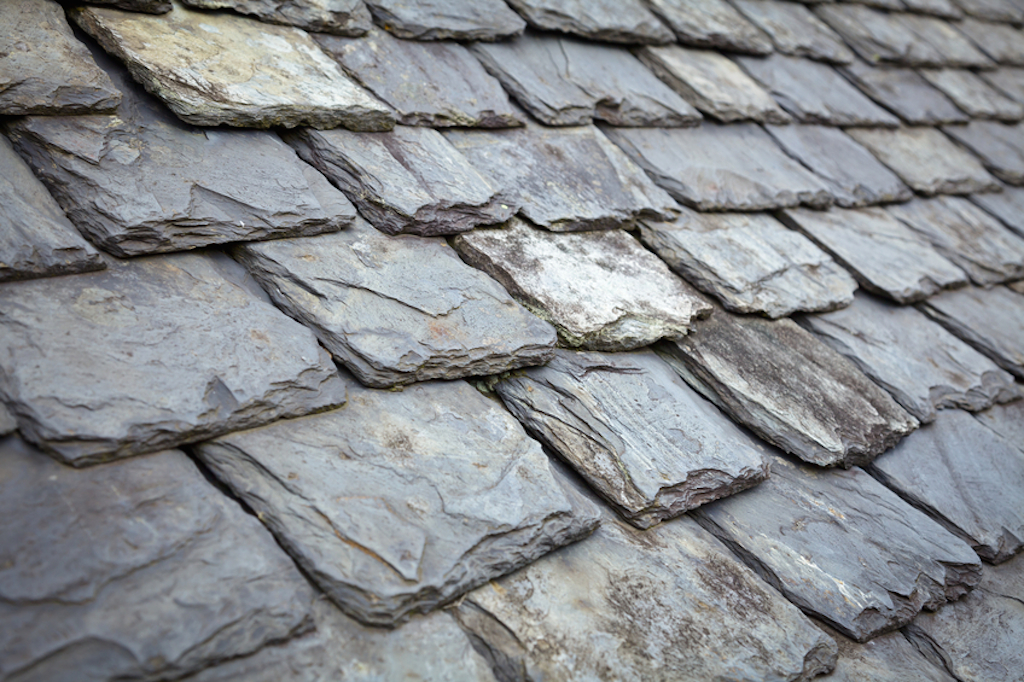 Slate is a fine-grained rock that tends to split into thin plates and is used as a material for roofing (a roof is the top of a house) or, before paper was widely available, for writing on. Slate is also a shade of dark-blue gray color. Mainly in the US, slate is also a list of candidates considered for nomination. In the film industry, a slate is a board that shows all the details of a take (i.e., a small segment that is filmed). As a verb, to slate means ‘to cover with slate,’ as in roofing. In the US, it also means ‘to write down or to set down for nomination,’ or more generally, ‘to schedule something.’ In the UK, slate also means ‘to criticize severely.’

clean slate: a clean record. Example; “Julie decided to move to a new town where no one knew her; that way, she would be starting with a clean slate.”

Clean Slate is the title of a 1994 movie. You can watch the trailer here:

In the UK, shops and pubs used to keep a record of a person’s credit written in chalk on a slate, so that it could easily be added to, amended, or wiped off when the person paid. Because of this, in UK English, on the slate still means ‘on credit,’ so, for example, someone buying a drink in a pub where they are known and allowed credit, might ask the landlord or landlady (the person who owns or manages the pub) to “put it on the slate.” However, the expression is not used so much now as it would have been in former times. In the US, you can say, “Put it on my tab.”

Slate, meaning the type of rock, dates back to the mid-14th century. It came into English from the Old French esclate, the feminine form of the noun esclat (splinter or split piece), and was used with this new meaning in English due to how easily the stone splits into shards. The Old French noun evolved from the verb esclater (to break, splinter or burst), and came into that language from a Germanic source, probably the Frankish slaitan (to tear or slit). It can be traced back to the Proto-Germanic slitan, though its origin before then is uncertain. Slate is related to the French éclat (fragment or splinter) and éclater (to shatter, burst or break), the Old Saxon slitan, the Old Frisian slita, the Old Norse slita, the Middle Low German and Middle Dutch sliten, the Dutch slijten, the Old High German slizan and the German schleißen (all meaning ‘to slit’), and the English words slat and slit. The sense ‘a tablet for writing’ (made out of slate) dates back to the late 14th century. The noun has been used as an adjective for things resembling the stone since the early 16th century, and this use solidified into a sense meaning the color (as both a noun and an adjective) in the early 19th century. The sense ‘a list of candidates’ was first used in the mid-19th century, on the notion of this preliminary list being written on a slate. The film sense dates back to the early 20th century, and is due to the similarity of the board (usually written on with chalk) to the slate tablets used centuries before. The expression clean slate emerged from the idea of a bartender erasing your debts from the slate after you’d paid. The verb, meaning ‘to cover with slates,’ dates back to the late 15th century, as the Middle English verb sclatten, and comes from the noun. The sense ‘to nominate’ (now rare) dates back to the early 19th century, and evolved into the more common ‘propose or schedule’ in the late 19th century.

See full definition
Learn more about slate in our forums

Slate in other languages