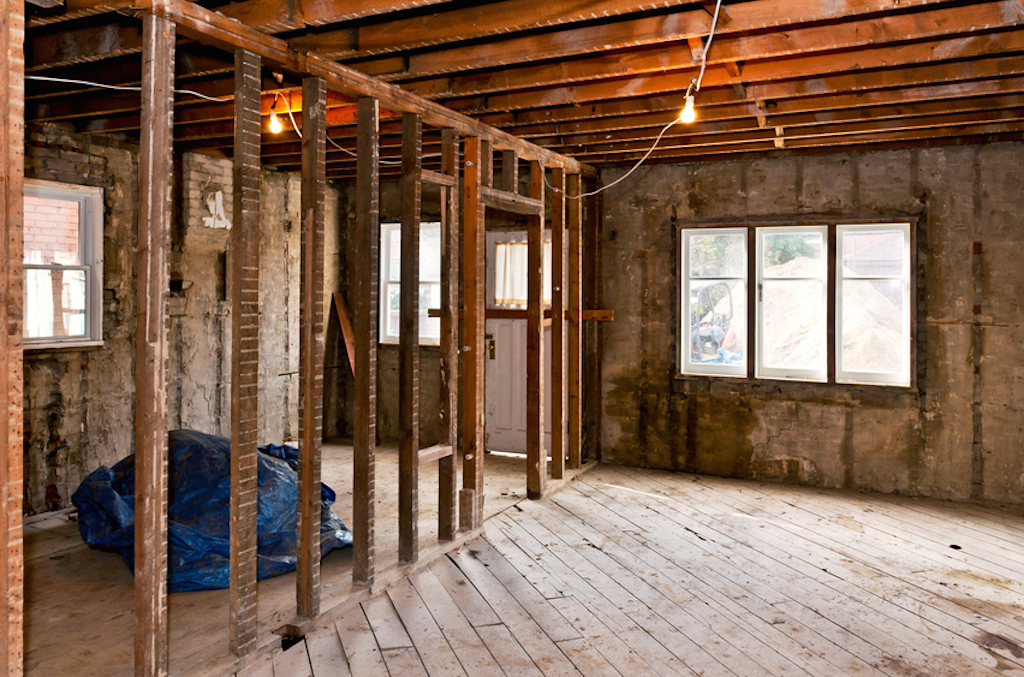 We gutted the house so we will be able to completely renovate the interior.

Gut, often in the plural form guts, is a synonym for intestines and also for belly or stomach. Figuratively, guts refers to the inner workings of anything and, informally, it means ‘courage or determination.’ As a verb, to gut means ‘to take out the inner organs of an animal’ and, by extension, ‘to destroy the interior of anything.’ It also means ‘to steal things from a house or town’ or ‘to remove the essence of something.’ As an adjective, gut refers to anything essential or based on instincts or feelings.

hate someone’s guts: really hate someone. Example: “I never want to see you again; I hate your guts!” This is an informal expression most often spoken by children.

spill your guts: tell someone everything you know. Example: “After hours of questioning, the suspect finally spilled his guts.”

have someone’s guts for garters (UK): punish or reprimand someone severely; most often said as a threat. Example: “When I find out who deleted all my files from the server, I’m going to have their guts for garters!”

The expression follow your gut is often used in English to mean you should obey your instincts, even if logically you think you should do something else. Examples: “If you think something is wrong, you should follow your gut.” “I got accepted by the two colleges I want to go to, and I don’t know which I should choose. They’re both equally good, so I might just have to follow my gut.”

Gut dates back to before the year 1000, in the form of the Old English plural noun guttas (Middle English guttes), meaning (figuratively) ‘bowels or entrails,’ from the singular gutta (Middle English gut), literally ‘a channel.’ It either derived or was related to the verb geotan (to pour), and can be traced back to the Proto-Germanic gut– and the Proto-Indo-European root gheu– (to pour). Gut is related to the Middle Dutch gote, the Dutch goot and the German Gosse (gutter or drain), as well as the Greek khein (to pour), khoane (funnel) and khymos (juice), the Latin fundere (to melt, cast or pour out), the Gothic giutan (to pour), the Old Norse geysa (to gush), and English words such as alchemy, confuse, diffuse, fondue, font, found, funnel, fuse, fusion, gush, gust, infuse, prefund, refuse, transfusion, and of course gutter (which derived from gut). The sense ‘abdomen or belly’ was first used in the late 14th century, and guts (usually in the plural) have been used to figuratively describe the insides of anything since the mid-16th century. Guts (always in the plural in this case), has been used as a colloquial synonym for courage or determination since the late 19th century. The expression to hate someone’s guts was first recorded in the early 20th century, while gut reaction and gut feeling are from the 1960s and 1970s, respectively. All these expressions are based on the very ancient idea that emotions resided in the stomach. The verb, meaning ‘to remove the entrails of something,’ dates back to the late 14th century, and comes from the noun. The figurative sense, ‘to destroy or plunder the interior of something,’ was first used in the late 17th century.

See full definition
Learn more about gut in our forums

Gut in other languages