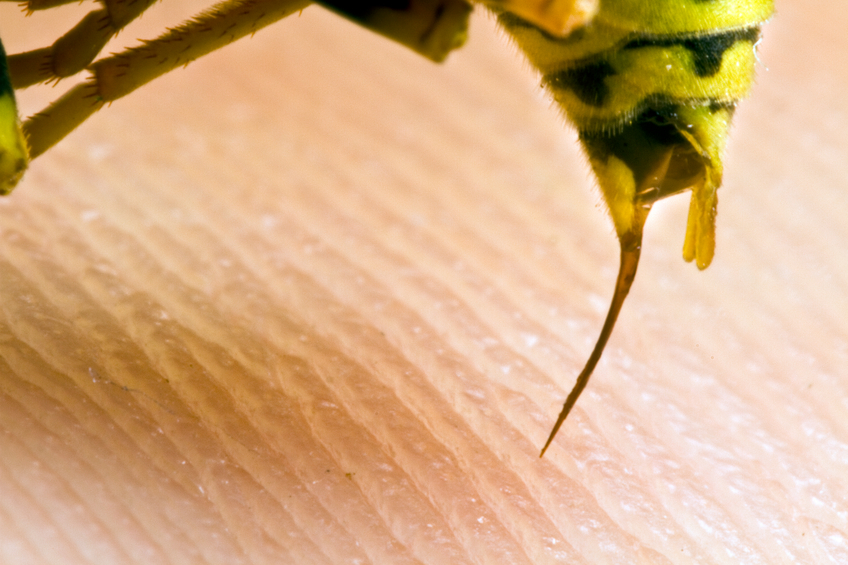 To sting means ‘to hurt someone with a pointed part of the body,’ like insects do. It can also mean ‘to hurt by means of contact,’ like some plants do. It means ‘to make someone feel a sharp pain’ and, figuratively, it can mean both ‘to cause someone to feel anger or resentment.’ Informally, sting means ‘to cheat.’ As a noun, a sting is the pointed part of insects and animals that stings, and it is also both the act of stinging and the pain caused by stinging.

Sting is also the name that English musician Gordon Sumner is more commonly known by. He got his nickname in the early 1970s, when he was playing with the Phoenix Jazzmen. At the time, he often wore a black and yellow striped sweater, and the band thought he looked like a bee or a wasp. Listen to Sting singing “Englishman in New York” here:

A sting is also a secret operation by undercover police, who hide their identities as police officers. They then appear to engage in illegal activity, in an attempt to infiltrate criminal groups and find evidence of actual crimes. Example: “Five drug dealers were arrested as a result of the police sting.”

In English, only insects with pointed stings are actually said to sting. Other insects, like mosquitoes, that suck blood from humans through sharp, tube-like mouth parts are said to bite.

Sting, meaning ‘to stab, prick or pierce with a pointed instrument,’ dates back to before the year 900, in the form of the Old English verb stingan (Middle English stingen). It can be traced back to the Proto-Germanic stingan, and probably the Proto-Indo-European root stegh– (to stick, prick or sting). Sting is related to the Old Norse stinga and Old High German stungen (to prick), the Gothic us-stagg (to prick out), the Old High German stanga and German stange (pole or perch), the German stengel (stalk or stem), the Greek stokhos (fixed target or erected pillar for archers to shoot at), the Lithuanian stagaras (long, thin stalk of a plant), the Old Danish stag (point) and the Old Norse stong (stick or pole), as well as the English words stag and stochastic. The sense narrowed to only stabs by insects by the late 15th century, though this sense later extended, figuratively, to plants or other substances that make us feel a similar type of pain. The figurative sense, ‘sharply painful,’ was first used in the mid-19th century. The slang sense ‘to cheat or swindle‘ dates back to the early 19th century, and the police sense, which evolved from it, first appeared in the 1970s. The noun, meaning ‘the act of stinging’ as well as ‘a puncture or a thrust,’ also dates back to before the year 900, as the Old English stingc or steng (Middle English sting), and comes from the verb. The sense ‘a sharp, pointed organ (usually on insects) that can inflict a painful puncture’ was first recorded in the late 14th century, though these days we’d usually call that organ a stinger. The sense ‘a carefully planned robbery or theft’ dates back to the early 19th century, while the police sense, ‘an undercover trap,’ is from the 1970s.

See full definition
Learn more about sting in our forums

Sting in other languages