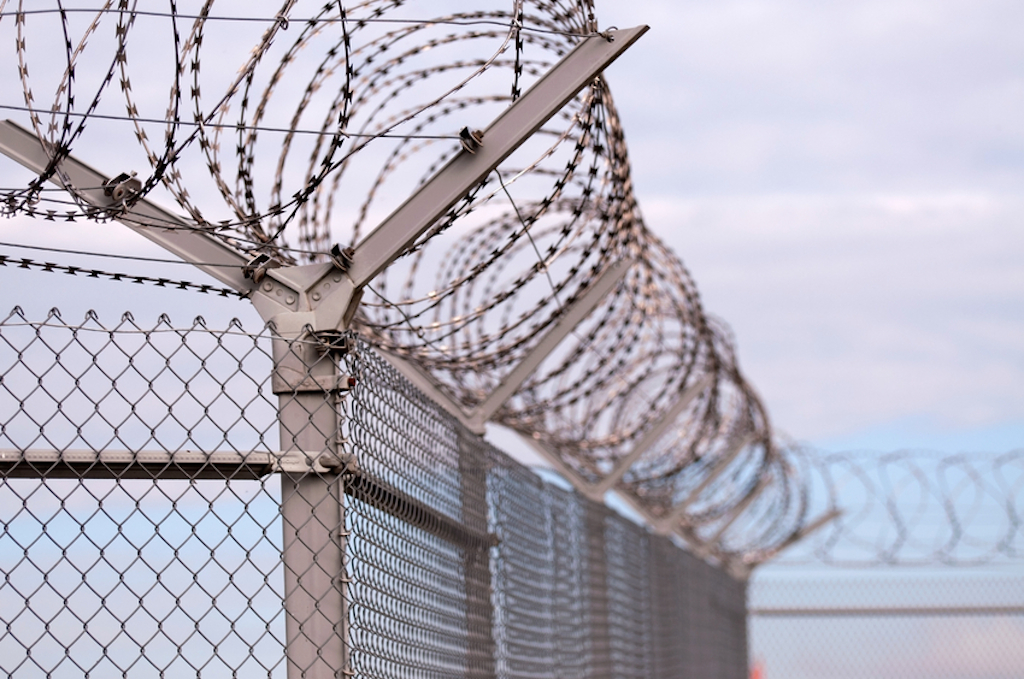 A barbed-wire fence is made of wire and has sharp metal pieces to cut anyone who tries to pass over it.

A wire is a thin piece of metal that looks like a thread, and it’s also the length of that material used as a conductor of electricity. A wire is also a telegraphic system and a message sent with it. As an adjective, wire refers to anything made out of wire or resembling wire. As a verb, to wire means ‘to equip with electrical wiring’ or, often with up, ‘to connect a building or neighborhood to a television cable.’ It can also mean ‘to send an electronic payment.’ As an adjective, wired means that someone is awake, excited, and especially alert.

be wired: have a certain kind of personality. Example: “I know many people are naturally nurturing, but I’m just not wired that way.”

Wire tapping is the act of listening in on (or tapping) someone’s phone calls. Law-enforcement agencies often do this to apprehend criminals.

The Wire is the title of a popular American TV show from the 2000s. It involves a police wire tap in Baltimore, which is used in an investigation against drug dealers. You can see the trailer for it here:

Wires used to be a quick way of getting a telegram message to someone or a verb to describe this action, but in the digital age, most people don’t send wires anymore. In the past, we might have said, “The journalist wired the story to her editor,” “Wire me if you have any news,” or “Sam sent his parents a wire to tell them he was safe.” You might come across these in old books or movies, but they are rarely used now.

Wire, meaning ‘a long, thin thread of metal,’ dates back to before the year 900, in the form of the Old English noun wīr (Middle English wir or wire). It can be traced back to the Proto-Germanic root wira– and the Proto-Indo-European root wei– (to turn, twist or plait). Wire is related to the Old Norse viravirka (filigree work), the Swedish vira (to twist), the Old High German wiara (fine gold work), the Greek itea (willow) and iris (rainbow), the Latin viere (to bend or twist) and vitis (vine), the Lithuanian vytis (willow twig), the Old Irish fiar and the Welsh gwyr (bent or crooked), the Polish witwa and the Welsh gwden (willow), the Russian vitvina (branch or bough), and English words such as garland, iridescent, iris, vise, viticulture and withe. The verb, originally meaning ‘to decorate with gold wire,’ dates back to around the year 1300, and comes from the noun. The sense ‘to comunicate using telegraphic wires’ first appeared in the mid-19th century, while ‘to fit with electrical wires and connections’ was first used in the late 19th century. The expression down to the wire evolved from the wire that was placed at the finish line of a racecourse to help decide close races in the late 19th century.

See full definition
Learn more about wire in our forums

Wire in other languages