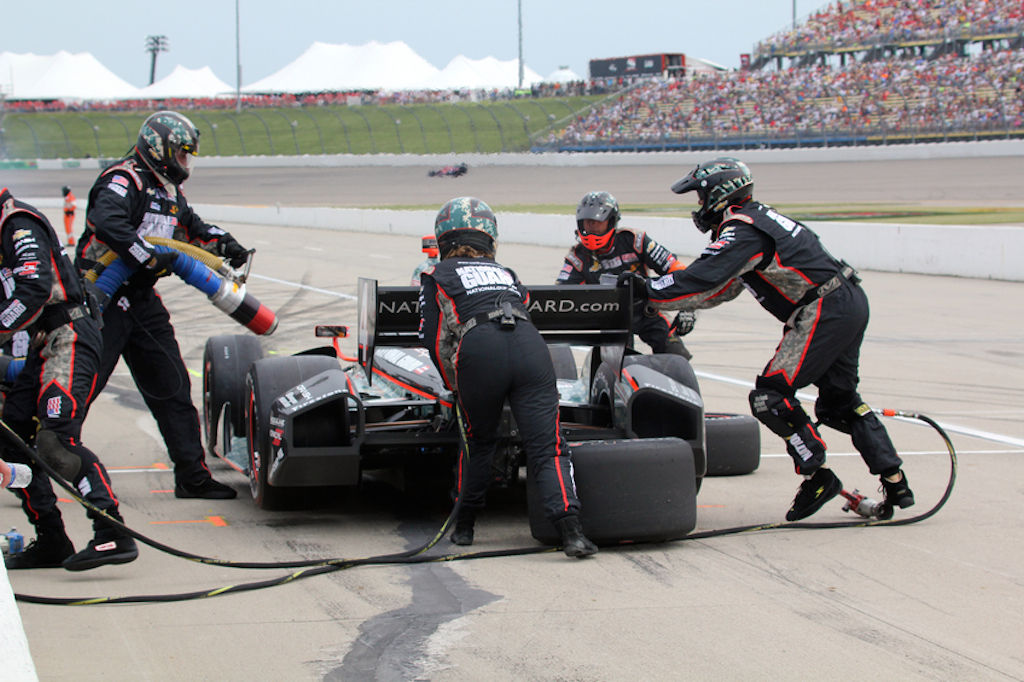 A pit is a hole in the ground, a hole that serves as a trap, or one made for looking for mineral deposits. A mine is also called a pit. A small scar on the skin can be called a pit (though this is often called an acne scar), and a pit is also an indention in any surface. In addition, pit is a closed area for dog or cock fights. As a verb, to pit means ‘to mark or indent a surface with a pit’ and also, with against, ‘to set two opponents to combat,’ literally or figuratively. Pit has another unrelated meaning: the stone of a fruit (for example, of an apricot, peach, or cherry); the verb pit means ‘to remove the stone from a fruit.’

pit stop: This is the stop of a race car in the middle of the race to change tires, refuel, etc. It is also used for any stop when people are driving, usually to use the bathroom and get food. Example: “A crew of workers helped refuel the race car and change its tires during the pit stop.” “We drove all day but took pit stops every few hours.”

orchestra pit: the area in a theatre where the musicians play; this is also referred to as just “the pit.”

A money pit is something where it seems like no matter how much you spend on it, it’s never enough. The Money Pit is a 1986 movie about a young couple who buy a house that needs some renovation. You can see the trailer here:

The expression “the pits” refers to a situation considered to be very bad. For example, you might say “I hate my job; it’s the pits!” The expression is figurative, making reference to the idea of a pit as a trap or a dark and difficult place to get out of.

Pit, meaning ‘a hole or cavity,’ dates back to before the year 900, in the form of the Old English noun pytt (found in Middle English as pit, pet or püt), which meant ‘water hole or well’ as well as ‘pit or grave.’ It can be traced back to the Proto-Germanic putt– (pool or puddle). Its origin before then is uncertain; some linguists think it may have been a loan-word from another (now lost) language to Germanic languages, or from the Latin puteus (trench, pit or well), from the Proto-Indo-European root pau– (to cut, strike or stamp), while others think it may have come directly from the PIE root pau-. Pit is related to the Old Frisian pet, the Old Saxon putti, the Old Norse pyttr, the Middle Dutch putte, the Dutch put, the Old High German pfuzza and the German Pfütze (all meaning ‘pool or puddle’), and if it is in fact from the PIE root pau-, it is also related to the Latin pavire (to beat, ram or tread down) and putare (to prune), the Greek paiein (to strike) and the Lithuanian pjauti (to cut) and pjūklas (saw), as well as the English words account, amputate, anapest, berate, compute, count, pavement, rate and reputation. The expression the pits, a figurative reference to a very bad place, evolved from the sense of pit as ‘hell’ or ‘a place with evil spirits,’ which dates back to the 13th century. The verb, meaning ‘to put into a pit’ and ‘to make pits in something,’ dates back to the mid-15th century, and comes from the noun. The former sense narrowed to ‘put into a pit for fighting’ by the mid-18th century, and the figurative sense, ‘to set against another for combat,’ also from the mid-18th century, developed. The unrelated noun pit, meaning ‘a hard seed in a fruit,’ dates back to the mid-19th century. It came into English from the Dutch pit (kernel, seed or marrow), and can be traced back to the Middle Dutch pitte and the Proto-Germanic root pithan-, of unknown origin. This sense of pit is related to the English word pith, meaning ‘the pulp on the inside of plant stems,’ as well as ‘the marrow inside animal bones and the center of birds’ feathers.’

See full definition
Learn more about pit in our forums

Pit in other languages