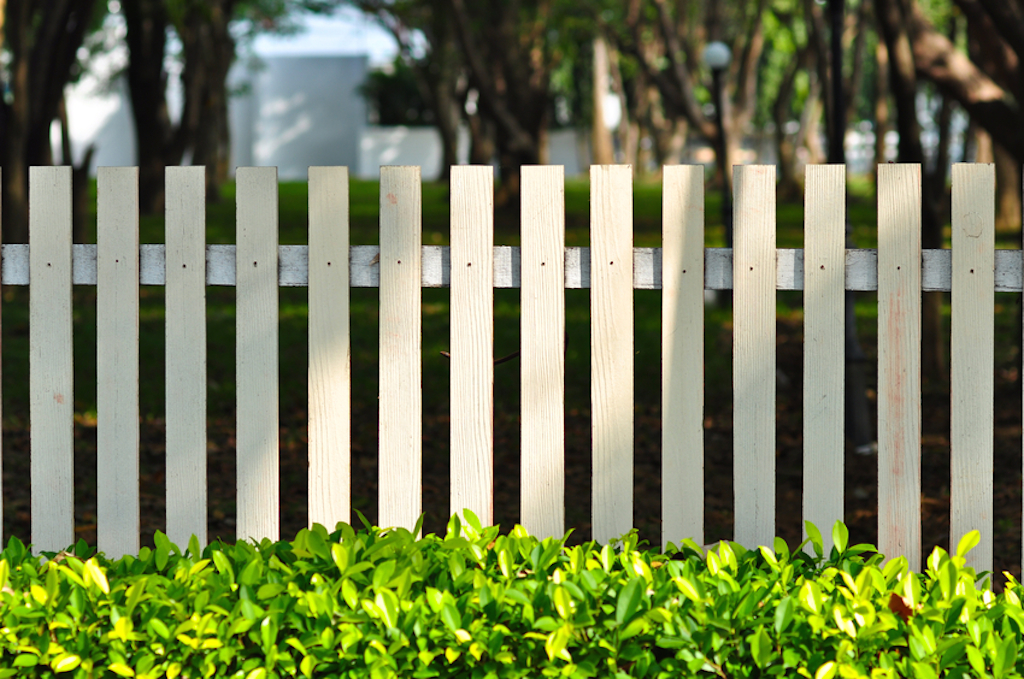 A fence is a barrier, usually made of posts and wires or wood, that encloses a territory and prevents entrance or keeps livestock (ie, animals in a farm) in. Informally, we call someone who receives and sells stolen goods a fence. Sometimes with the word off, to fence means ‘to enclose a space with a fence’ or ‘to separate something as if with a fence.’ Informally it means ‘to sell stolen things.’ To fence also means ‘to practice fencing,’ a sport in which opponents fight each other with a special sword.

on the fence: undecided. Example: “Come on, yes or no? You can’t just stay on the fence; you have to make a decision!”

mend (your) fences: make peace. Example: “The two countries have been quarreling for years, but now they seem to be mending their fences.”

fence in: to put up a fence, or (figuratively) to prevent someone from being free. Example: “The farmer fenced in the animals so they wouldn’t run away.” “Don’t fence yourself in; you should go for your dreams.”

Fences is the title of a 2016 movie starring Denzel Washington. You can watch the trailer here:

Fence is also sometimes used to mean ‘to avoid giving a direct answer.’ For example, you could say, “The politician wouldn’t say exactly what the policy would be; she just kept fencing.” A more commonly used synonym in this context is hedge.

Fence, originally meaning ‘the action of defending or resistance’ as well as ‘a means of protection or fortification,’ dates back to the early 14th century, as the Middle English noun fens. It evolved as a shortened form of the noun defens, with the same meanings, and came into English from the Old French defens and the Latin defensum (something protected or forbidden), which is the neuter form of the part participle of the verb defendēre (to ward off or protect), made up of the prefix de– (from or away) and the verb fendēre (to strike, hit or push), ultimately from the Proto-Indo-European root gwhend– (to strike or kill). Fence is, therefore, related to the Spanish, Galician and Portuguese defender, the Italian difendere, the French défendre and the Catalan defensar (all meaning ‘to defend’), as well as the Latin offendere (‘to strike against’ or ‘to encounter’) and infensus (aggressive or hostile), the Hittite kue(n)zi (to kill), the Sanskrit ghnanti (to kill), the Greek theino (to slay or kill), the Armenian jnem (to strike), the Lithuanian ginti (to protect or defend), the Old Irish gonaid (wounds or kills), the Welsh gwan (to thrust or hit) and the Old Breton goanaff (to punish or sting). By Late Middle English, the senses had split into two separate words, with defense keeping only ‘the action of defending or resistance,’ and the shorter fence taking the meaning ‘a means of protection or fortification.’ The sense narrowed to ‘an enclosure’ (which is something that serves as a defense) by the mid-15th century. The sense ‘to deal in stolen goods’ dates back to around the year 1700, and was built on the figurative idea of dealing under the defense of secrecy. The expression on the fence was first used in the early 19th century. The verb, meaning ‘to defend yourself,’ dates back to the early 15th century, and comes from the noun. The sense ‘to protect with a fence or similar enclosure’ appeared in the mid-15th century. The sense ‘to deal in stolen goods’ is from the early 17th century. ‘To fight with swords,’ in the sports sense, dates back to the late 16th century. In the early 16th century, fence was also used as a noun related to the sport, but was soon replaced by the noun fencing.

See full definition
Learn more about fence in our forums

Fence in other languages