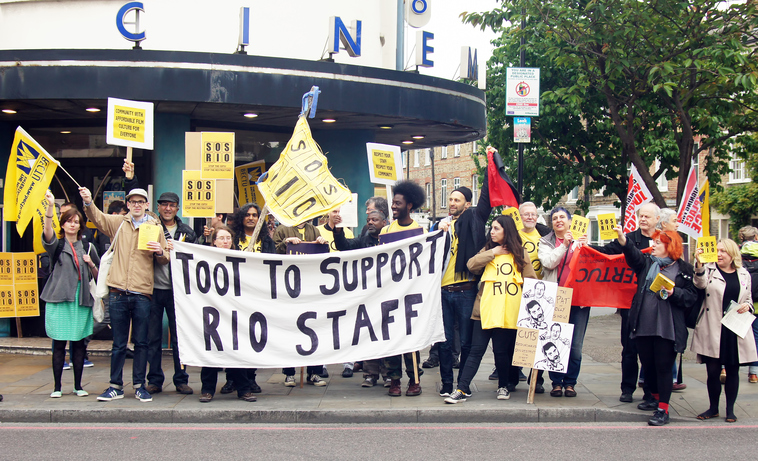 People on strike often stand in front of their place of work to protest.

To strike means ‘to hit someone,’ ‘to suddenly attack,’ and ‘to collide or crash into something’. Strike also means ‘to happen suddenly,’ often with bad consequences. Figuratively, to strike means ‘to enter the mind,’ ‘to impress,’ and ‘to overwhelm or affect strongly.’ To strike also means ‘to remove’ or ‘to cross out.’ As a noun, a strike is of course the act of striking and it is also a kind of work protest where workers stop activity to force an employer to agree to demands.

strike out: fail. Example: “Ben really wanted that job, but it looks like he’s struck out; he sent the application ages ago and hasn’t heard back.”

strike off: remove. Example: “Those two students have left, so you can strike their names off the register.” This is more common in the UK. In the US we usually say,”cross out.”

strike up: begin. Example: “I like striking up conversations with strangers; you get to meet some really interesting people.”

strike a chord: be meaningful to someone. Example: “The candidate’s policies on equal pay and free childcare have struck a chord with women voters.”

strikethrough (computer font): A way of typing so that the words appear to be crossed out, .

strike something from the record (legal): not record something that has been said in a court of law, because it is legally inadmissible.

strike home: have an impact. Example: “Valerie’s arguments really struck home and Rob found he had changed his mind after listening to them.”

strike it big: be very successful. Example: “This new business is very promising; I’m sure the owners are going to strike it big.”

In baseball, a strike is when the batter swings at the ball and misses. The batter is allowed to miss two strikes, but if the third is also missed, then the batter is out. This sporting usage has led to a figurative meaning, mainly in US English, so if someone is on their last chance at something, you might tell that person, “You already have two strikes against you,” or you might remind them, “Three strikes and you’re out!” In particular, in the US, this terminology is informally applied to legislation that exists in many states, where an offender is given a harsher sentence, perhaps even a life sentence, when convicted of a crime for a third time. Informally, this legislation is called a three-strikes law. The baseball meaning is used in the song Take Me Out to the Ballgame, played at baseball games and known to almost every American. You can listen to it and read the lyrics here:

The related adjective striking means something makes a strong impression upon you and is often used to mean that someone is very attractive and has a very compelling presence. Often such people are a little unusual looking, rather than conventionally attractive.

Strike dates back to before the year 1000. The Old English verb strācian (later stroken in Middle English), meaning ‘to pass lightly over, stroke or rub’ as well as ‘to go, move or proceed,’ can be traced all the way back to the Proto-Indo-European root streig- (to stroke, rub, or press), even though the meaning has changed dramatically. It is related to the Old Norse strykva (to stroke), the Old Frisian strika, the Middle Dutch streken, the Dutch strijken (all meaning ‘to smooth, stroke, or rub’), the Old High German strihhan and the German streichen, as well as the English words streak and stroke. The senses ‘to deal a blow’ and ‘to collide’ both appeared in the 14th century, as did ‘to hit with a missile or a weapon.’ The sense ‘go toward,’ on the other hand, is preserved from Middle English. To strike, meaning ‘to refuse to work,’ was first used in the mid-18th century, while the baseball sense dates back to the mid-19th century.

See full definition
Learn more about strike in our forums

Strike in other languages