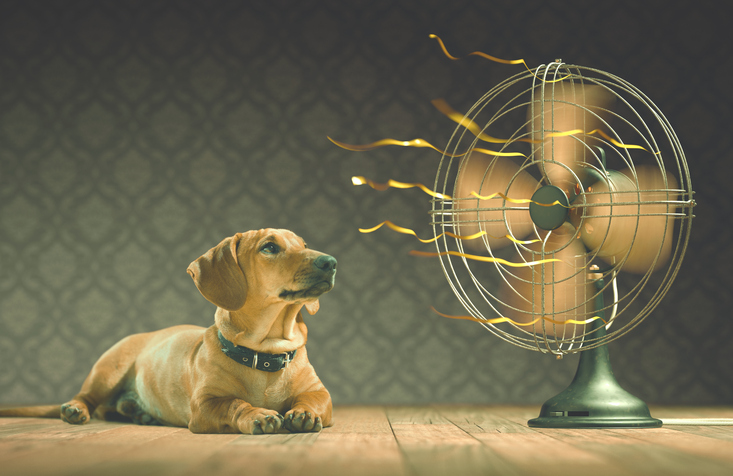 A fan is a device that produces a current of air. A fan is also an implement made of paper or other material often shaped as a long triangle or a semicircle that you wave with your hand to create a cooling current of air. As a verb, it means ‘to move with or as if with a fan’ and ‘to blow on something, as with a fan.’ To fan also means ‘to spread out,’ ‘to stir to action,’ either literally or figuratively, and, in US English, ‘to move quickly.’ A fan is also an enthusiastic follower or admirer, and the word is a short form of ‘fanatic.’

hit the fan: to suddenly become very difficult. Example: “It all really hit the fan for the politician when the press found out about her affair.” There is also a common vulgar expression, “When the sh*t hits the fan,” which means the same thing.

Fans are used to great effect in flamenco dancing. You can see a dancer demonstrating how to use a fan here:

In the Southern US, fan also means ‘to spank’ (ie, to hit a child on the rear end) and, in baseball, to fan means ‘to strike out a batter.’

Fan dates back to before the year 900. The Old English and Middle English noun fann, meaning ‘winnowing basket’ (that is a basket in which grain is separated from leaves and twigs when tossed into the air) and comes from the Latin vannus, with the same meaning. It is probably related to the Latin ventus (wind), and comes from the Proto-Indo-European root wet-, meaning ‘to blow.’ The meaning ‘a device for moving air’ was first used in the late 14th century. The verb comes from the noun, and, with the meaning ‘to winnow grain,’ first appeared before the year 1000. Meaning ‘to move air,’ it was first used in the early 15th century. The other meaning (a short form of fanatic), first appeared in reference to baseball lovers in the late 19th century.

See full definition
Learn more about fan in our forums

Fan in other languages

Fan was suggested by Helen, from Chicago.