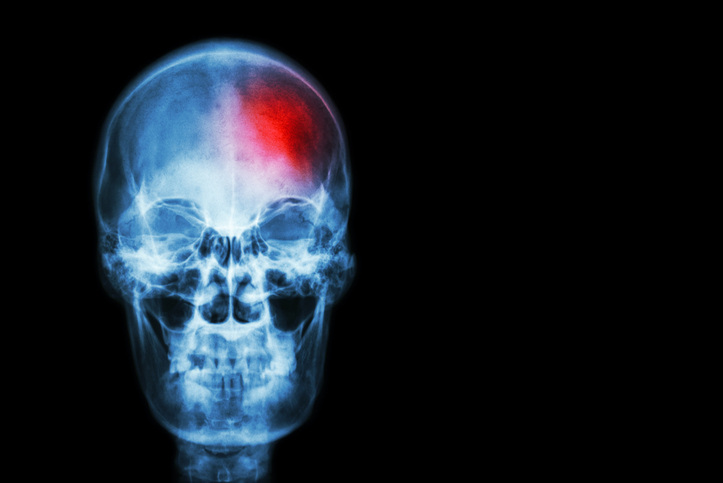 A stroke is an instance of hitting or striking and the sound produced by striking. It’s also a sudden and strong movement or a sudden occurrence. In medicine, a stroke is a cerebrovascular accident, a blockage or hemorrhage of a blood vessel leading to the brain, causing inadequate oxygen supply. In sports, a stroke is a hit of the ball and, in the arts, it is the movement of a pencil or brush. As a verb, it means ‘to mark with a stroke of a pen or pencil’ and ‘to hit a ball.’ To stroke also means ‘to pass your hand over something gently and tenderly.’ The related noun stroke is an instance of stroking.

stroke of luck: an unexpected chance. Example: “Getting this job was a real stroke of luck; I wouldn’t even have seen the ad if I hadn’t visited my mother that day and looked at her newspaper.”

stroke someone’s ego: flatter (ie, excessively compliment) someone, usually to get what you want.  Example: “Peter is stroking his supervisor’s ego in an attempt to get a raise.”

On the stroke of followed by a time, means at exactly that time (because you can hear the church bells striking the hour). Perhaps the most famous example of this is “on the stroke of midnight.” In the fairy tale Cinderella, this is the time the spell wears off and Cinderella’s coach turns back into a pumpkin and her clothes back into rags, so her fairy godmother warns her she must leave the ball before this happens. Like all of us when we are enjoying ourselves, Cinderella forgets the time and has to flee the ball in a hurry. You can see her doing that in the classic Disney film:

Stroke, meaning ‘to pass your hand gently over something or someone,’ dates back to before the year 900. The Old English verb strācian, and later the Middle English verb stroken, meaning ‘to pass lightly over, stroke or rub,’ can be traced all the way back to the Proto-Indo-European root streig- (to stroke, rub, or press). It is related to the Old Norse strykva (to stroke), the Dutch strijken (to smooth, stroke, or rub), the Old High German strihhan and the German streichen, as well as the English words streak and strike, which you may remember from another Word of the Day. The figurative sense (to soothe or flatter) dates back to the early 16th century. The noun (meaning act of striking) comes from the verb and was first used around the year 1300. The time-related meaning (stroke of a clock) was first used in the mid-15th century, while the meaning for ‘stroke of a pen’ from the mid-16th century, the sense of ‘achievement’ from the late 17th century, and the sense of ‘a single movement of machinery, and oar or other equipment’ from the mid-18th century. The medical meaning dates back to the late 16th century, and was originally “the Stroke of God’s Hand.”

See full definition
Learn more about stroke in our forums

Stroke in other languages