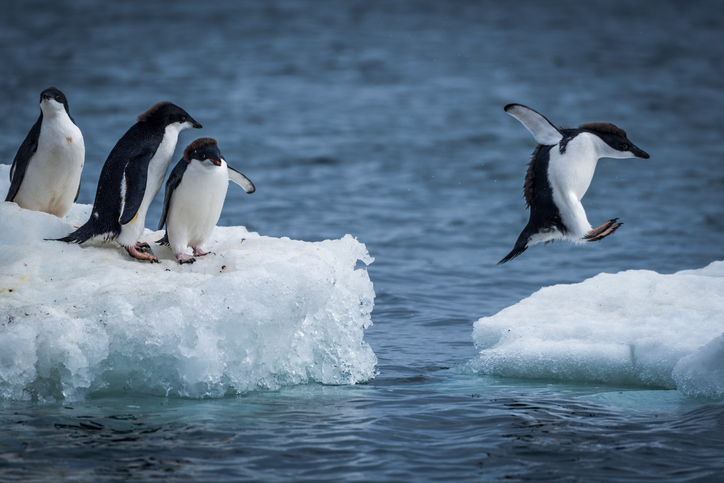 A penguin hopping onto a floating piece of ice

To hop is ‘to make a short jump or bounce,’ like birds or some animals do, and also ‘to jump on one foot,’ ‘to jump over something’ or ‘to move quickly,’ as if jumping. Informally, to hop means ‘to go frequently from one place or situation to another’ and, in US English, ‘to ride on a vehicle.’ A hop is short leap with one foot, a short movement in general, and, in US English, a short bounce, as of a ball. Hop is also a short trip, especially by plane.

hop up (US, slang): to excite. Example: “The speaker hopped up the crowd.” Also, to add to the power of. Example: “Charlene plans to hop up that old car she bought.” Perhaps more common is the related adjectival expression hopped up, which means that someone is very excited, or is intoxicated. Example: “He was hopped up on drugs that night and doesn’t remember a thing.”

hop to it (informal): do something quickly. Example: “There are customers waiting to be served, so hop to it!” This can sound dated nowadays.

hop it (UK, informal): go away. Example: “The old man was fed up with the local kids sitting on his garden wall, so he told them to hop it.”

In 1958, Danny and the Juniors had a chart-topping hit with the song “At the Hop”; in the past, hop meant dance party, though this meaning is rare now.

In more modern times, the association of hop with music is perhaps more common in hip hop, which is a style of music that arose out of a 1970s underground urban movement in New York’s South Bronx. The term hip hop itself is said to have been coined by Keith “Cowboy” Wiggins, who used the words in 1978 to tease a friend who had joined the army, by chanting, “hip, hop, hip, hop,” in a way that mimicked the rhythm of soldiers marching. Wiggins was in a band, called Grandmaster Flash and the Furious Five, and began to work this rhythmic way of singing into his music. Here are Grandmaster Flash and the Furious Five singing their 1982 hip hop song “The Message.” (Note: As is common in hip hop, some lyrics of the song are explicit.)

Hops, always in the plural, are the dried ripe cones of the female flowers of a twining plant of the hemp family, used in brewing beer.

Hop, meaning ‘to spring, leap or limp,’ as well as ‘to dance,’ dates back to before the year 1000. The Old English verb hoppian (and the Middle English verb hoppen) can be traced back to the Proto-Germanic word *hupnojan. It is related to the Old Norse hoppa (hop, skip), the Dutch huppen and the German hüpfen (to hop). The noun comes from the verb, and dates back to around the year 1500. The unrelated noun hops, meaning ‘the cones of the vine used to make beer,’ dates back to the mid-15th century, as the Middle English hoppe, and comes from the Middle Dutch hoppe (the hop plant).

See full definition
Learn more about hop in our forums

Hop in other languages