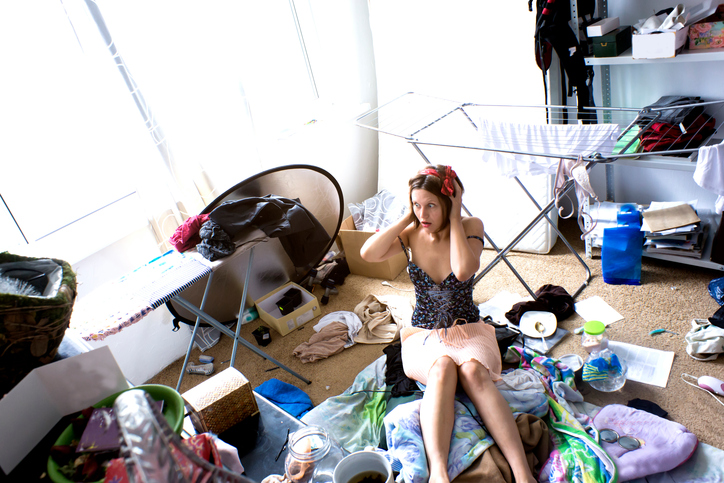 My apartment is a mess!

A mess is a disorderly or dirty state or thing. When we call someone a mess, we mean that his or her life is in a state of confusion or disorganization. A mess is also an untidy jumble of things, and it can mean ‘trouble or an unpleasant situation.’ As a verb with the adverb up, to mess means ‘to make something dirty or untidy’ and also ‘to ruin something’ or ‘to make something fail.’

mess around: waste time. Example: “Stop messing around and help us put the tent up.”

mess around with somebody/something: get involved with. Example: “Mark was a nice young man until he started messing around with drugs.”

mess with something: meddle, get involved when you shouldn’t. Example: “I don’t care what Kevin said about me behind my back; stop trying to mess with our relationship.”

mess with somebody: get on the wrong side of. Example: “That guy is always getting into fights. He’s not someone you want to mess with.”

The Mess Around is an African-American dance. You can read more about it by clicking here, and hear Ray Charles encouraging people to do this dance in his song of the same name:

In military terms, a mess is a group of people taking a meal together, and also the meal itself. And a mess hall (also called a mess deck aboard ships), or sometimes simply the mess, is an area where military personnel socialize, eat, and sometimes live.

Mess dates back to the late 13th century, as the Middle English mes, which meant ‘food for one meal.’ It comes from the Old French mes (a course at a meal), and can be traced back to the Late Latin missus, meaning ‘what is sent’ (in other words, ‘what is put on the table’), a noun use of the past participle of the Latin verb mittere (to put in place). The verb comes from the noun and first appeared in the 14th century. The meaning of ‘communal eating place’ dates back to the 16th century. Interestingly, the most common meanings now are the most recent, and all come from American English. ‘To make a mess’ dates back to the mid-19th century, and ‘to interfere with’ is from the early 20th century. The phrasal verb mess with was first used less than 100 years ago, in 1933.

See full definition
Learn more about mess in our forums

Mess in other languages