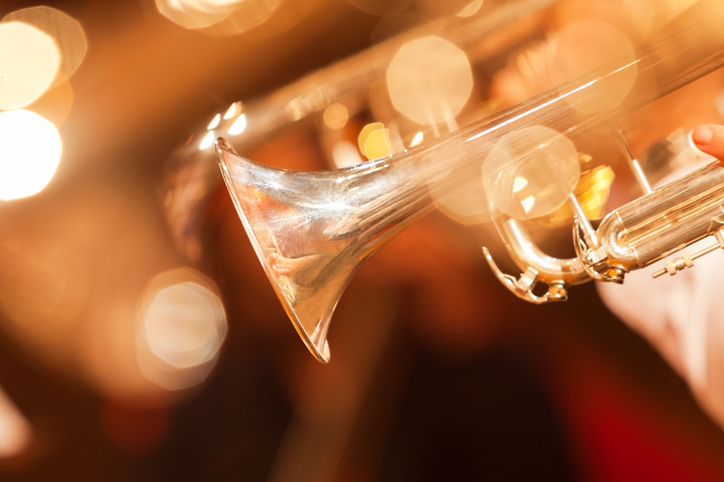 Horns in an orchestra

A horn is one of the bony, pointed growths on the head of certain animals, like goats or antelopes, or the similar single bone growing on animals, like rhinoceroses. A horn is also the substance that such animal growths are made of and a similar substance that forms tortoise shells and nails. Additionally, a horn is a musical instrument originally formed from the hollow, or empty, horn of an animal, but it now is usually made of brass or another metal. A trumpet is sometimes called a horn colloquially. A horn is also an instrument for sounding a warning signal. As a verb, to horn means ‘to strike with the horns.’

blow (or toot) your own horn: boast about yourself. Example: “Well, I don’t like to blow my own horn, but I am a really great pianist.”

pull in your horns: become less belligerent or more restrained. Example: “When he was young, he was pretty wild, but he’s pulled in his horns since he got married and had kids.”

horn in, horn in on something: intrude, interrupt. Example: “My roommate is so nosy; he’s always horning in on my conversations with friends.”

In the village of Abbots Bromley in England, some of the villagers perform a dance, known as the Abbots Bromley Horn Dance, on Wakes Monday (the first Monday after the 4th of September) every year. The tradition dates back to the Middle Ages and the dancers wear reindeer horns. They collect the horns from the village church in the morning and spend all day performing the dance at various locations in the village. You can see the horn dance here:

Horn dates back to before the year 900. The Old English noun horn, and later the Middle English noun horn(e), meaning ‘the horn of an animal,’ but also, figuratively, ‘pinnacle or projection,’ can be traced back to the Proto-Germanic noun hurnaz, which is also the origin of the Dutch horen, the Old Norse, Danish and Swedish horn, the German Horn, and the Gothic haurn. In fact, it can be traced even further back, to the Proto-Indo-European root ker-, which meant ‘horn, head, or uppermost part of the body.’ The Greek karnon and the Latin cornu, which both meant ‘horn,’ came from the same root, so horn is also related, more distantly, to the Irish and Welsh corn and the Spanish cuerno, among many others.

See full definition
Learn more about horn in our forums

Horn in other languages