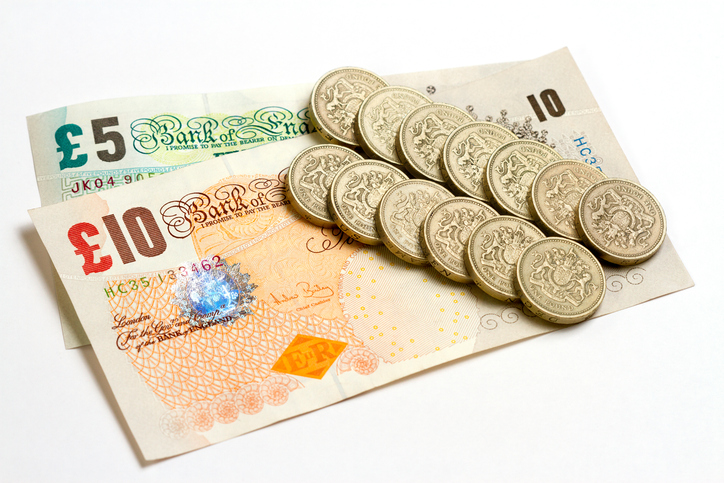 Pound is a unit of weight used in many English speaking countries, equal to 0.453 kg, and it is also the monetary unit of the UK, and other countries like Lebanon and Egypt. As a verb, to pound means ‘to hit with force and repeatedly’ and, often with the adverb out, ‘to produce something through striking something.’ If your heart pounds, it means that it beats heavily and repeatedly. Related to this, the noun pound is the act of pounding.

pound away: work hard on something. Example: “The author has been pounding away on her novel for a year now and it’s still not finished!”

pound of flesh: something someone tries ruthlessly to get from you (the expression is a reference to the Shakespeare play The Merchant of Venice). Example: “My boss is determined to always get his pound of flesh out of me and I always end up working extra hours in order to be able to get away on holiday!”

pound the pavement: walk the streets looking for work. Example: “I’ve been pounding the pavement for weeks, but there are just no jobs out there!”

Pound cake is a special cake made with a pound of butter, a pound of flour, a pound of eggs, and a pound of sugar. The following video explains the science behind this delicious cake and shows you how to make it.

A pound is also a place where stray animals (ie, dogs and cats that live in the street) are kept by public authorities, as well as the place where illegally parked vehicles are taken and held until the owners pay the corresponding fine. The verb for this is to impound a car. “My car was impounded last week and it cost $500 to get it back!”

The UK and Australia, as well as some other English speaking countries, have officially adopted the metric measurement system, but some people, especially older people, still use pounds and ounces. The abbreviation for pound, when talking about the weight, is lb, which comes from the Latin word libra, meaning balance or scales, but was also a unit of weight in the term libra pondo meaning ‘a pound by weight.’ The English word pound comes from the pondo part, but we take the abbreviation from the libra part and so end up with lb.

In the US the pound is still widely used.

Pound, the unit of measurement, dates back to before the year 900. As you read above, the Old and Middle English noun pund came from the Latin pondus, meaning ‘weight,’ and in all likelihood, from the expression libra pondō, which meant a pound by weight. It is related to the Dutch pond, the German Pfund, and the Gothic and Old Norse pund. The abbreviation for pound is lb, because it comes from the other part of the Latin compound (libra), which is also the origin for many Romance language words for pound, such as the French livre and the Spanish libra.

Pound has also been used as a unit for money since before the year 900; the Old English pund was originally the shortened way to say ‘a pound of silver.’ The abbreviation for the British pound, £, can be traced back to the Latin libra, just as the other abbreviation (you may notice how many symbols for money strike a letter through with vertical or horizontal lines), and has appeared in accounting books since before the year 900.

The verb to pound dates back to before the year 1000, as the Old English pūnian, and later the Middle English pounen, meaning ‘crush, pulverize, beat or bruise,’ and comes from the West Germanic root puno-. It is related to the Dutch puin, meaning ‘fragments or rubbish.’ Finally, the noun pound, meaning ‘an enclosed area for animals,’ dates back to the late 14th century, though its roots can be found in some Old English compounds (pundfald, meaning ‘penfold,’ for example). It is related to the Old English verb pyndan (to dam up or enclose water), and comes from the same root as pond.

See full definition
Learn more about pound in our forums

Pound in other languages

Pound was suggested by Helen, from Chicago