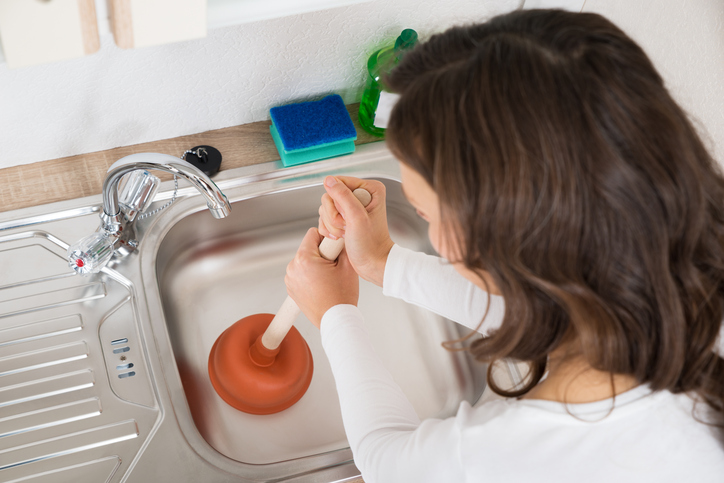 A woman fixing a clogged sink

To clog means ‘to block or obstruct with a thick substance,’ ‘to fill excessively,’ and ‘to hinder or impede.’ A clog is anything that restricts movement. Unrelatedly, a clog is a type of shoe or sandal with a thick sole or bottom, made of wood or cork. A clog dance is a type of dance performed wearing these shoes and to clog, as a verb, is also to dance this type of dance.

In Britain, clog dancing began during the Industrial Revolution. No one is sure of the dance’s exact origins, but it may have started in cotton mills in Lancashire (in the north of England), where workers wore wooden-soled shoes to keep their feet dry in the mills, which were kept damp to help with cotton spinning. To keep their feet warm, the workers would tap them in time with the machines they were working. This led to dancing competitions when the workers had breaks. People still clog-dance today, especially in Wales and Lancashire, but also in the US, where it is more often known as clogging. Here is a video of a Lancashire group performing at the Derby Folk Festival:

The earliest meaning of clog as a noun is a thick piece of wood and the word is still used to mean this in Scotland.

There is also a variety of wheat called clog-wheat, which is also known as cone-wheat or bearded-wheat.

Clog, or clogge in Middle English, dates back to the early to mid-14th century, and meant ‘a lump of wood.’ Its origin is unknown, but linguists think it is Germanic, because of a few similar words in other Germanic languages, such as the Norweigan klugu (knotty log of wood). It also probably has the same origin as the English word log. Clogge was also used figuratively in Middle English to refer to large pieces of jewelry and large testicles. The sense of ‘wooden-soled shoes’ was first recorded in the late 14th century, and is a figurative use of the original meaning (these shoes were lumps of wood), even though now clogs can be made of many different materials. The most common meaning today, ‘something that impedes action,’ or ‘something that blocks or obstructs’ dates back to the early 16th century. The verb comes from the noun, and dates back to the late 14th century. It originally meant ‘to hinder,’ especially with a piece of wood. The meaning ‘to obstruct’ first appeared in the early 17th century.

See full definition
Learn more about clog in our forums

Clog in other languages

Clog was suggested by Rodrigo, from Uruguay