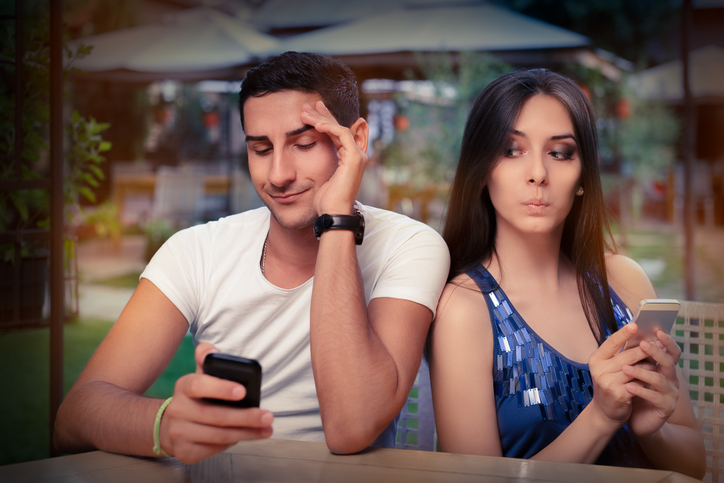 She is sneaking a look at his phone.

To sneak means ‘to behave as if to be unnoticed or unseen’ or ‘to behave dishonestly or secretively.’ It also means ‘to put something away or to move it in a secretive way.’ In UK English, and rather dated now, to sneak means ‘to inform on someone,’ particularly at school. As a noun, a sneak is a person who is not trustworthy or, again in dated UK English, an informer. As an adjective, sneak refers to something done without warning or without being seen.

A sneak peek or sneak preview is a brief, secretive look at something, especially an opportunity to see something before it is officially available, so it might be a very short clip of a movie that is coming out soon, a short article on some features of new software, or perhaps a short extract from a forthcoming novel. It can also be a showing of a movie before it is officially released. Here is the sneak peek of a recent Doctor Who Christmas special:

The past participle and past tense of sneak is either sneaked or snuck. Snuck used to be considered nonstandard, but is so widely used now that it has been considered correct for many years in US English and is increasingly coming to be seen as correct in UK English too.

Just to show that even respected scientists may sometimes be a little sneaky, here is an article from The Guardian about a group of Swedish scientists who spent seventeen years sneaking Bob Dylan lyrics into their research articles, as part of a bet to see who could quote the most lyrics before they retired!

Though sneak first appeared in the mid-16th century (in the first written example we have, it is implied in the adjective sneakish), it is thought to be a variant of the Middle English snicken, which comes from the Old English snīcan, meaning ‘to creep.’ It can be traced back to the Proto-Germanic verb sneikanan, and the Proto-Indo-European root sneg-, which could mean ‘to crawl’ as well as ‘a creeping or crawling thing,’ and is the root of the word snake. The noun comes from the verb and first appeared in the mid-17th century, while its use as an adjective dates back to the late 18th century.

See full definition
Learn more about sneak in our forums

Sneak in other languages