Intermediate+ Word of the Day: mash 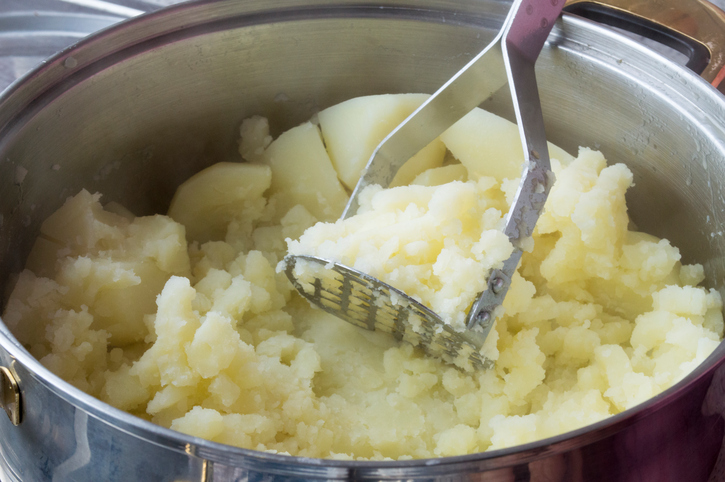 To mash is what we do when we beat or press something until it becomes soft and pulpy, like we do when cooking, and it also means ‘to crush.’ As a noun, a mash is a soft and pulpy mass and also a mix of grains used to feed horses or cattle. Informally, in UK English, mashed potatoes are often just called mash.

A mashup is a musical composition created by mixing two or more recorded songs together to make a new one. Here is an example of a mashup of The Rolling Stones’ “Start Me Up” and Bon Jovi’s “Living on a Prayer” from the TV show Glee:

M*A*S*H is also a classic American TV show from the 1970s. It’s about medical officers in the Korean war. In this case, MASH stands for Mobile Army Surgical Hospital. This is the famous opening theme song.

In US English, mash had a completely unrelated slang meaning, though it is rarely used now. As a verb, it means ‘to flirt’ and, as a noun, a mash is both the flirting or the person you flirt with.

A mash is also a mixture of ground malt and hot water used in brewing and distilling. In US slang, it is also a type of whiskey made from a mash of fermented grains.

Mash dates back to before the year 1000. The Old English noun mǣsc, and later the Middle English masc, were usually found in compounds like masc-wyrt (mash-wort, or infused malt), and can be traced back to the Proto-Germanic root maisk-, and further back to the Proto-Indo-European root meik-, ‘to mix.’ They are related to the Swedish mäsk ‘grains for pigs,’ the German Maisch ‘crushed grapes’ or ‘infused malt,’ and the Old English meox ‘dung or filth.’ Mash‘s original meaning was confined to brewing, but it took on the more general sense of ‘anything pressed into a soft or pulpy consistency’ by the late 16th century. The figurative sense of ‘confused mixture or muddle’ is also from the late 16th century. The verb does not actually come from the noun. It dates back to before the year 1000 as well, as the Old English mæscan, and later the Middle English Masc(k)en, which come from the same origin as the noun.

See full definition
Learn more about mash in our forums

Mash in other languages