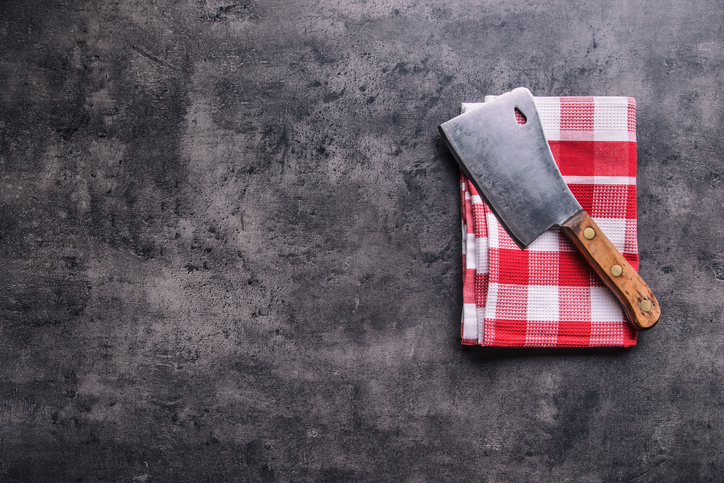 The knife is sharp.

sharp practice: behavior that is so shrewd or clever it is almost dishonest. Example: “That accountant has never been found guilty of anything, but he has a reputation for sharp practice.”

Informally, when talking about clothes and how someone dresses, sharp means ‘stylish.’ If you know someone who is very stylish, you can call him or her a sharp dresser. You can hear this use of sharp in the ZZ Top song “Sharp Dressed Man.”

Sharp is also a tone that is a half-step above a given tone and, in musical notation, the symbol ♯ indicates this. Example: “Can you play an A-sharp please?” Related to this sense, any sound that is said to be sharp is high pitched and piercing. Example: “Boris uttered a sharp scream as he fell off the cliff.”

A sharp taste is a taste that is strong or bitter; for example lemons and some cheeses could be said to have a sharp taste.

Sharp dates back to before the year 900. The Old and Middle English adjective scearp (pronounced like sharp, but with a longer a than Modern English) meant ‘having a cutting edge or pointed,’ but also ‘intellectually acute or shrewd,’ ‘with keen senses,’ and ‘severe, biting, or bitter.’ It comes from the Proto-Germanic adjective skarpaz, which meant ‘cutting.’ It is related to the German scharf and the Dutch scherf (both of which mean ‘sharp,’ but also ‘hot’ when talking about food like chillies). Sharp can be traced back to the Proto-Indo-European root (s)ker- (to cut), which is also the origin of the Irish cearb (a cut) and the English words keen and shear. The meaning ‘cutting or sarcastic,’ referring to words or talk, is from the 13th century, while ‘quick to take advantage’ appeared in the late 16th century. The musical sense is from the mid-16th century. Finally, the sense ‘stylish’ is slang from the mid-1940s, and comes from earlier 1940s slang, in which sharp meant ‘excellent.’ The adverb comes from the adjective, and was scearpe in Old and Middle English. It dates back to around the year 1000, but it fell out of use until the mid-19th century, when it reappeared with the meaning ‘abruptly’ and then ‘promptly.’

See full definition
Learn more about sharp in our forums

Sharp in other languages