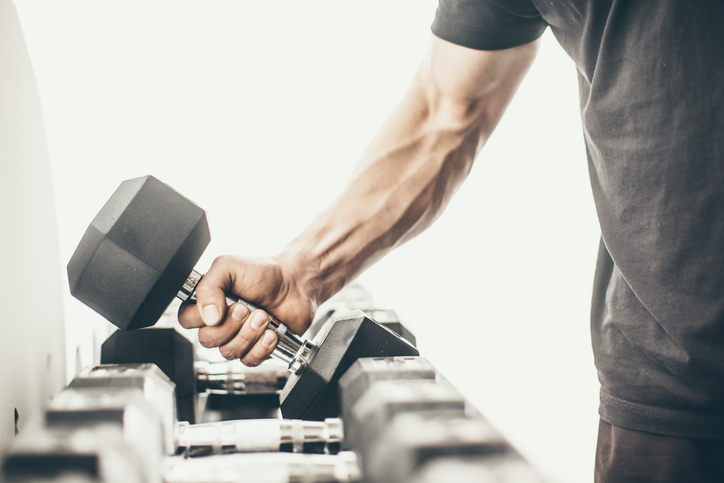 He has a stiff hold on the weight.

Stiff means ‘rigid’ or ‘not working or not moving.’ When related to drinks, it means ‘strong ‘ and, referring to wind, it means ‘strong and powerful.’ When a task is stiff, it means that it is difficult and when a demand or punishment is stiff it means that it is severe. Stiff also means ‘very formal or unfriendly’ and also ‘lacking (not having) ease and grace.’ When talking about a price, stiff means ‘excessively high.’ As an adverb, stiff means ‘in a rigid or firm state’ and, informally, ‘completely, excessively.’

Stiff is also a slang verb that means ‘to fail to tip or pay.’ Lately, there have been a lot of stories in the news about waiters and waitresses being stiffed by people trying to make a point. While these cases are shocking, they are also rare. It is much more common for waiters and waitresses (as well as hotel staff) to be stiffed by mistake, especially in places with a lot of tourists, simply because tipping is different in their own countries. In some countries in Europe, like France, some restaurants already include tips in the bill (look for a service charge), making it unnecessary for diners to tip separately, though a small tip is often left if the service is good. Others, like Austria, Switzerland and Germany, rarely include a tip, so giving a server Trinkgeld, which translates to ‘money for drinks,’ is the norm. In these countries, waiting staff salaries are decent, so the tip is usually around 10% for a meal, and just a round-up of a euro or two for coffee. Europeans are often shocked that in the US, a tip of 15 to 20% is usually expected, and it is seen as very rude to tip under that. They are mostly unaware that the salary for wait staff is very low, because tips will make up the difference. If you want to avoid stiffing people when you travel, make sure to look up the tipping norms for the country you’re visiting. Here’s a handy video about tipping in Canada:

Something that is supposed to be typical of the attitude of British people is the stiff upper lip. Because your upper lip normally trembles if you are feeling emotional, when you say someone has a stiff upper lip, it means that person does not show emotion. Historically, showing emotion was considered to be a sign of weakness and boys in particular, especially boys at British public schools (in Britain a public school is actually a private school where parents of the children attending have to pay fees—a school that is funded by the public through taxes is called a state school) were encouraged to learn to keep a stiff upper lip at all times and to continue this attitude into adulthood. Here is Dr. Thomas Dixon talking about the stiff upper lip in a recent BBC documentary:

The slang term working stiff refers to a member of the working class.

Stiff dates back to before the year 1000. The Old and Middle English adjective stīf, meaning ‘rigid or inflexible,’ comes from the Proto-Germanic stifaz (inflexible), and is related to the Dutch stijf, the Old High German stif and the German steif (all meaning ‘stiff’), as well as the Old Norse stifla (choke). It can be traced further back to the Proto-Indo-European root steip-, meaning ‘press together, pack or cram,’ and is also the origin of words like the Greek stia, stion (small stone) and steibo (press together), and the Latin stipare (pack down, press) and stipes (post, tree trunk), which gave us a few other words in modern English, like stone and stipulate. The noun (meaning ‘dead body’) comes from the adjective, and has only been in use since the mid-19th century. It is a figurative allusion to the fact that rigor mortis makes dead bodies stiff. The meaning ‘working man’ dates back to the 1930s. The verb comes from the adjective, and first appeared in the late 14th century, meaning ‘to make stiff,’ for which we now use the verb stiffen. The slang use, ‘to not tip,’ dates back to the late 19th century, and was originally used by restaurant and hotel workers. It is thought to be a reference to the noun slang meaning ‘dead body,’ since “dead men can’t tip.” It expanded to mean other types of cheating in the mid-20th century.

See full definition
Learn more about stiff in our forums

Stiff in other languages