Intermediate+ Word of the Day: beef 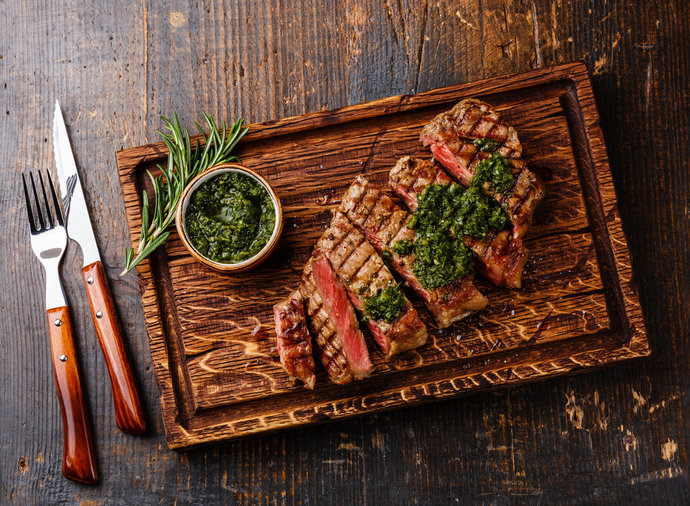 We’re sure you know that the beef is the flesh of the cow raised and killed for meat. However, in informal conversation beef means ‘strength, power’ and also ‘the weight of a person.’ It can also mean ‘human flesh,’ especially when muscular. As a slang term, beef is a complaint or an argument. The verb beef is related to this last sense and it means ‘to complain’ or ‘to grumble.’

beef up: become bigger, especially more muscular. Example: “That actor has really beefed up for his latest role; he must have spent hours in the gym every day.”

beef head: a stupid person (usually refers to a man). The word meat head means the same thing and is more common. Example, “I don’t know why Julia is going out with him. He’s such a beef head! I’ve never heard him utter an intelligent sentence.”

To beef it up refers to a dance move made popular by the band Charlie Boy Group. The dance is done in groups, but individual people can do the dance facing in different directions, as long as they keep the beat. Each foot moves off the ground, one after the other, and the dancer sways. Any sort of arm movement is allowed, but it should look relaxed and fluid. Here is a video of Charlie Boy Group performing the dance:

The popular UK children’s comic The Dandy had a character called Bully Beef (also known as Beefy), who was a big, beefy kid who picked on (bullied) a smaller kid called Chips. Chips was more clever than Beefy though, and he always got his own back (that means he got his revenge) in the end. You can read more about Bully Beef and Chips and see some of the comic strips by clicking  here.

Beef dates back to around the year 1300. It came into Middle English as the noun we use today, beef, from the Anglo-French buef (Old French boef; Modern French boeuf), which meant ‘ox, beef or ox hide.’ It can be traced back to the Latin bov- (stem of bovem, bōs, bovis), meaning ‘ox or cow.’ While the singular noun hasn’t changed much, the plural has: it used to be beeves. The noun meaning ‘complaint’ dates back to the late 19th century, and was first used in the US. The related verb meaning, ‘to complain,’ appeared soon after. The noun meaning ‘argument’ dates back to the 20th century.

See full definition
Learn more about beef in our forums

Beef in other languages