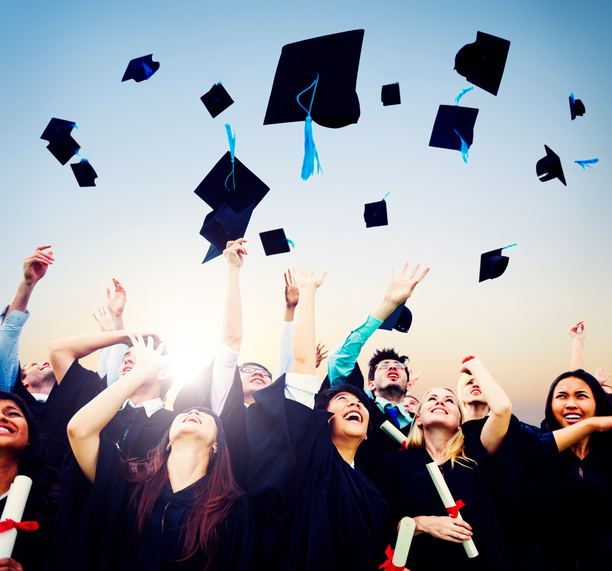 It's a tradition for graduates to fling their hats into the air.

To fling means ‘to throw with violence or without care’ or ‘to move yourself violently.’ It means ‘to send or put something or someone somewhere without preparation’ and ‘to involve yourself in something.’ As a noun, a fling is the act of flinging, and also a short period of pursuing desires without restraint.

fling out (UK): throw away. Example: “Those shoes have holes in them. You should fling them out.”

fling on, fling off: put on or take off clothes hastily. Example: “Hang on a minute while I fling on a coat and I’ll come with you.”

Related to the meaning of moving yourself violently, the Highland fling is a Scottish dance where the dancers make flinging movements with their arms and legs. You can see a video of some dancers performing a Highland fling at the 2010 Halkirk Highland games here:

When talking about a fling as a brief period of indulging in unrestrained passion, fling is most commonly used to talk about a romantic affair. However, it can also be used to talk about a brief infatuation for anything, so if someone developed a brief but passionate interest in politics, you might say, “Mark’s fling with politics only lasted three months, but he spent hours campaigning during that time.” Other words that also primarily refer to romantic love but can be used to talk about interest in other activities are flirtation and dalliance, but whether talking about romance or anything else, both of these imply a lesser level of involvement than fling.

Fling dates back to the late 13th century, in the form of the Middle English verb fling(en), meaning ‘to dash, run or rush.’ It’s probably related to the Old Norse flengja (to flog), and some linguists even believe this is how it came into English. It’s also likely that the Proto-Germanic flang (which is also the origin for the Swedish flänga, ‘to fly, race,’ the Swedish flenga, ‘to strike,’ and the Danish flænga, ‘to slash or gash’). All of these words may come from the Proto-Indo-European root plāk- (to strike). The meaning ‘to flow or hurl’ first appeared in the mid-14th century. The noun comes from the verb, and dates back to the early 14th century, and originally meant ‘attempt or attack.’ The sense of ‘a period of indulgence’ (usually romantic), is from the early 19th century, and was originally used to describe the particular wild indulgences that people allowed themselves before taking on a responsibility, such as marriage.

See full definition
Learn more about fling in our forums

Fling in other languages