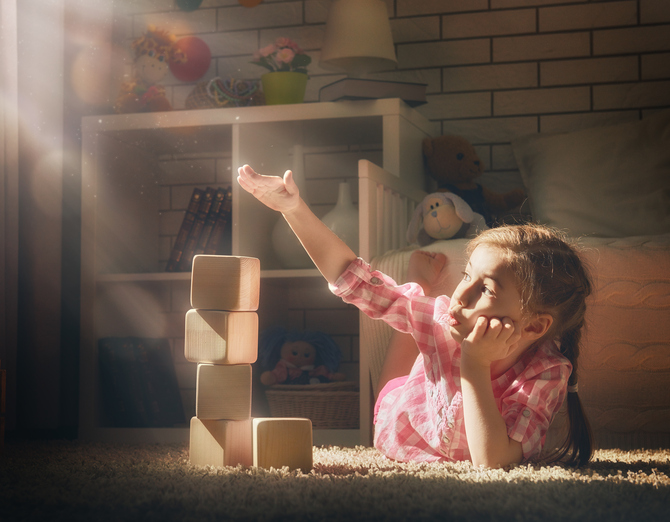 A girl playing with blocks

A block is a large piece of stone or wood and also a tiny one, with designs engraved on it, used for printing. Anything that prevents movement, both literally and figuratively, is a block, as is a piece of wood or plastic in the shape of a cube, like the ones children use as toys. In sports, a block is the action of stopping an opponent. Mainly in US English, block is also a section of a city surrounded by streets. As a slang term, a person’s head is a block. To block, as a verb, means ‘to get in the way,’ ‘to stop something or someone’ and, usually in the passive, ‘to suffer a stoppage of thinking or writing.’

block out, block in: outline roughly. Example: “During the meeting, the team blocked out the main points of the project. Now we just need to decide on the finer details.”

be on the block: said of someone’s head. This means that a person is the one taking a risk (it is a reference to the executioner’s block, where prisoners would have to lay their heads for the executioner to chop them off). Example: “This project has to succeed, otherwise all our heads will be on the block!” In US English, when we say something other than a head is on the block, we mean that it is up for auction. In the UK, they would say that the same thing up for auction is under the hammer. Example: “Grandma’s china tea set is on the block. We hope it sells for a high price.”

writer’s block: difficulty writing or coming up with ideas for written work. Example: “Lots of people suffer from writer’s block when they have to write important essays.”

block party: a street party with people who live on the same block. Example: “We had a barbecue at this year’s block party.”

Jennifer Lopez’s 2002 song Jenny from the Block is about how Lopez is still the same person she was before she achieved fame and fortune; the block here has the meaning of a section of city streets.

A related word, one we think you will have heard of, is blockbuster, which is used to refer to movies and books that are considered to be exciting and successful and that make a big impression. However, you may not know that the word originally referred to bombs used by Germany in the Second World War that were so powerful they could flatten a whole block of buildings. Once the war was over, the word began to be used figuratively to refer to things that made a big impact and that led to the modern-day use of blockbuster.

Block dates back to the late 13th century, when the Middle English noun blok meant ‘log or tree stump,’ and, by extension, ‘a solid piece of something.’ It comes from the Middle French bloc (log), but came into English through the Middle Dutch blok (log or tree stump). While most linguists agree in this case, some think that block actually came into English from the Old High German bloh, or from a common Germanic source. In either case, the origin can be traced back to the Proto-Indo-European root bhlugo, from another PIE root, bhleg-, meaning ‘thick plank or beam.’ As a verb, block first appeared in English in the late 16th century. While the verb does in fact come from the noun, this extension of the meaning did not happen in the English language. Instead, our verb block comes from the French verb bloquer, which, of course, does come from the noun.

See full definition
Learn more about block in our forums

Block in other languages