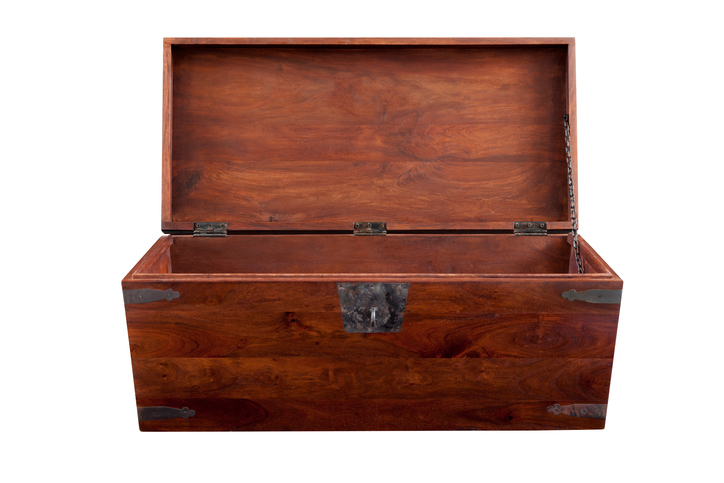 The chest is the front part of a human’s body, from the neck to the abdomen. A chest is also a box with a lid used to store things or, especially in the UK, a small cabinet, usually hung from the wall, used for keeping small things such as bottles of medicine. In a public institution, the place where the funds, or money, are saved and the funds themselves are is also called chest.

chest of drawers: a piece of furniture consisting of a frame and several drawers. Example: “I keep my clothes in a chest of drawers.” A chest of drawers is not the same thing as a dresser, even in US English. A dresser may have drawers, but it is only hip height, and sometimes has a mirror.

get something off your chest: talk about something you have been keeping to yourself. Example: “Arthur felt better once he had gotten his financial worries off his chest.”

play your cards close to your chest: be secretive or cautious in the way you deal with something. Example: “It is always hard to know what that businesswoman is thinking. She plays her cards close to her chest.”

Perhaps the best known type of chest is a treasure chest of the sort you get in pirate movies. The 2006 Pirates of the Caribbean movie Dead Man’s Chest is about Captain Jack Sparrow and his crew trying to find the chest containing Davy Jones’s heart (making it a play on the two meanings of chest, as a box with a lid and as the part of the body that houses the heart when someone is alive). You can see the movie trailer here:

A war chest was what people used to call the (physical) chest kept by soldiers in their homes, or, when they were living with the army, in the barracks (ie, the place where soldiers live). It contained their arms, or weapons, and armor, and anything they would need to go to war at a moment’s notice. Nowadays, it is used figuratively to mean the money (or sometimes even equipment) put away by a person or company to be used in case of a dangerous or challenging situation.

Chesty (adjective) is used to describe someone who has a large chest. “I’m a bit chesty, so halter tops look very good on me.”

Chest dates back to before the year 900. The Old and Middle English cest or cist (pronounced chest or chist), meant ‘box, coffer or casket.’ It comes from the Proto-Germanic noun kista, which is also the source of the Old Norse and Old High German kista, the Old Frisian, Middle Dutch, and Middle German kiste, and the Dutch kist. The origin is not really Germanic, however. It can be traced back to a very early borrowing of the Latin noun cista (chest or box), which also gave us the English word cistern, and in turn comes from the Greek kístē, meaning ‘box.’ Chest, meaning ‘thorax,’ first appeared in the early 16th century, and was originally a figurative use, looking at the ribs as the container for the organs. Before that, this area was commonly known as the breast.

See full definition
Learn more about chest in our forums

Chest in other languages