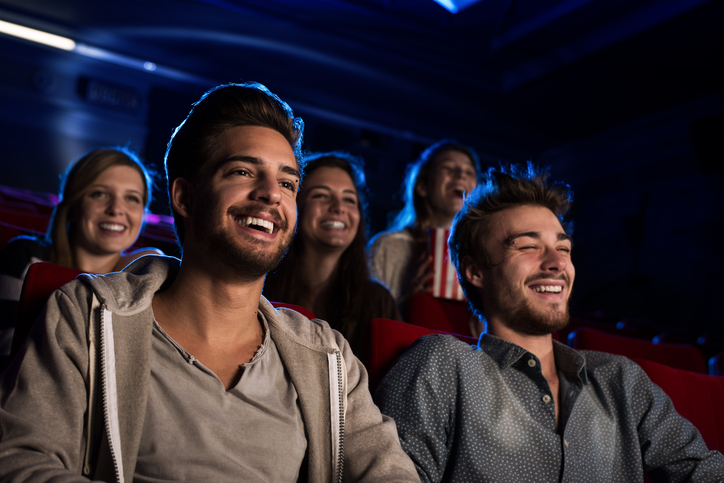 These people are entertained.

Most commonly, to entertain means ‘to hold someone’s attention’ usually by amusing them in some way. However, entertain has many other meanings, like ‘to have someone as a guest’ and ‘show hospitality.’ It is also a synonym for consider, in reference to an idea, and it means ‘to harbor or hold,’ in reference to feelings or thoughts.

Entertaining is, of course, what performance artists do. Whether through singing, dancing, telling jokes, or acting, their performances are designed to entertain the audience. Therefore, it is unsurprising that someone might write a song about entertaining, like the 1997 Robbie Williams hit “Let Me Entertain You.”

The related noun entertainer is what you call someone who entertains, like a performance artist. There is a 1957 play by John Osborne called The Entertainer, about a middle-aged music hall artist whose career is starting to fail, and you can see a clip from the 1960 film adaptation of the play, starring Laurence Olivier, here:

“The Entertainer” is also the name of a classic song by Scott Joplin. The song is from 1902 and is an example of the ragtime musical genre that was very popular at the time and that originated in African American communities.

Entertain dates back to the mid-15th century, in the form of the Middle English verb entertenen, which meant ‘to hold mutually,’ ‘to keep up or maintain,’ or ‘to keep someone in a certain frame of mind.’ It comes from the Middle French entretenir, which meant ‘to hold together, stick together or support,’ and before that, from the Vulgar Latin intertenēre, formed from the Latin inter- (among) and the Latin verb tenēre (to hold). The sense ‘to have a guest’ dates back to the late 15th century, while ‘to amuse or gratify people’ is from the early 17th century. The meaning ‘to consider something’ is also from the early 17th century.

See full definition
Learn more about entertain in our forums

Entertain in other languages

Entertain was suggested by Mercedes, from Spain.