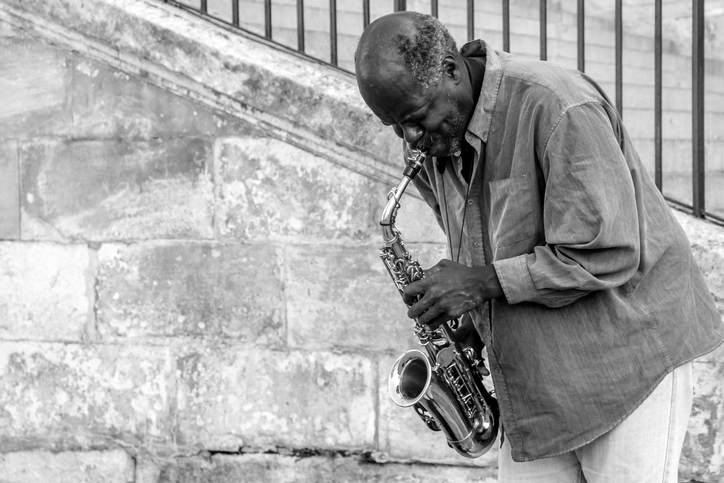 A man playing jazz in the street

Jazz is a music genre that originated in the early 1920s in New Orleans, US. However, jazz is also a slang word that means ‘liveliness, excitement, spirit,’ as well as ‘pep or enthusiasm,’ in reference to a person. It can also mean ‘unnamed things that are similar or related to another thing.’ In fact, that is why people started calling the music style jazz in the first place. In a negative sense, jazz means ‘insincere or pretentious talk.’ As a verb, to jazz means not only to play jazz music, but also ‘to excite or accelerate’ and, vulgarly, ‘to have sex,’ though it is rarely used as a verb these days in any of its senses.

jazz up: this expression can mean to add liveliness or excitement, or to add ornamentation. Example: “Monique says we need to jazz up the flyers to make sure people notice them, but I think they’re fine as they are. What do you think?” In an archaic sense, it could also mean ‘to accelerate.’

and all that jazz: an expression that groups together unnamed but similar things. Example: “Andrea told me about a new shop that sells vintage records, posters, and all that jazz. We should check it out!”

jazz hands: outspread, energetic hands. The term was coined in theatrical jazz dance, but it’s often used (sometimes mockingly) in other contexts. Example: “The choreographer uses jazz hands a bit too much in that dance.”

Jazz, as a musical genre, is very hard to define. It originated in African American culture in New Orleans, according to most historians, in the late 19th or early 20th century. It is characterized by a mix of rhythms, blues notes and improvisation, and is influenced by folk, blues and ragtime, as well as European military marches and West Africn music. It became popular in the 1920s, which is sometimes known as the jazz age.

As it spread, jazz developed different styles, feeding off the popular and traditional music of different places. Here’s a more modern jazz song you might recognize, Louis Armstrong singing “What a Wonderful World” in 1967:

While jazz is rarely used as a verb now, there is an adjective derived from the verb that you’ll still hear: jazzed, meaning excited. (“Sheila’s jazzed about tomorrow’s basketball game. She got us front-row tickets!”)

In addition to a musical genre, jazz is also a type of dance. It emerged with the music, and was originally a fast-paced, improvised dance. Since then, it’s developed into a theatrical dance (sometimes called modern jazz to avoid confusion). Here is some jazz choreography from the American competition TV show So You Think You Can Dance.

Jazz dates back to the beginning of the 20th century. It is believed to have appeared as baseball slang originally, but soon came to mean the kind of music we know today. It probably comes from the Creole patois jass, which meant ‘strenuous activity,’ but was often used to specifically refer to sex and some dances of African origin. It is likely a variation on the Creole word jasm, from the mid-19th century, and probably has African roots. It is related to the Mandingo word jasi and the Temne word yas. The sense of ‘rubbish, unnecessary talk or ornamentation’ dates back to the 1920s. The verb, usually found as the phrase jazz up, meaning ‘to speed or liven up,’ comes from the noun and appeared around the same time.

See full definition
Learn more about jazz in our forums

Jazz in other languages