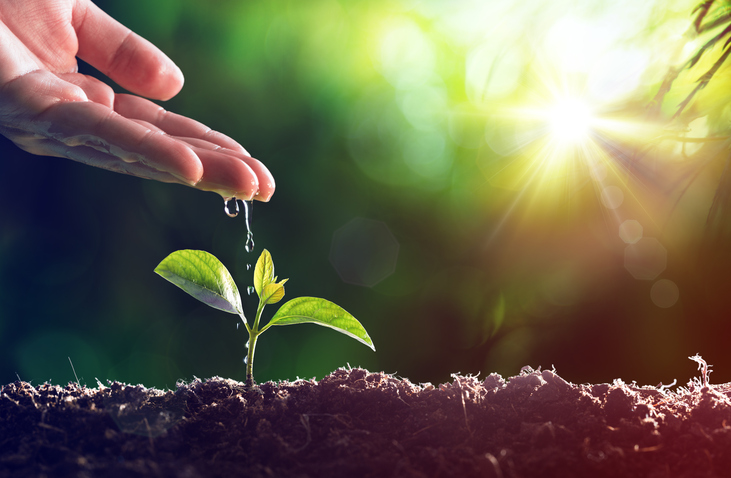 If you tend to the plants, they will grow.

When we’re talking about something that happens, to tend means ‘to be likely or usual.’ If someone or something tends to or toward something, it means that they are disposed to it or that they have a particular tendency toward it. Tend also means ‘to lead in a certain direction or to a certain result.’ In a different sense, tend also means ‘to take care of’ or ‘look after’ and is sometimes used with the word to.

tend on, tend upon: now archaic, but you might come across this in old books. It means ‘to wait or attend upon.’ Example: “The servants tended on their master and mistress.”

“The Way I Tend to Be” is a song by English folk singer Frank Turner. You can listen to the song and watch the video here (no, we’re not sure why he’s digging either!):

Tend comes from Latin, where it means ‘stretch,’ ‘extend,’ or ‘proceed.’ This meaning is found in words like “distend” (to become swollen), “extend” (to stretch out or to make bigger), or “tendon” (a cord that connects muscle to bone in people’s bodies).

In nautical terminology, to tend means ‘to swing around,’ when talking about a ship, because of a turn in the tide or wind.

Tend, meaning ‘to incline’ or ‘to move in a certain direction,’ dates back to the early 14th century. The Middle English tenden came from the Middle and Old French tendre (to stretch out, hold forth or offer), which in turn comes from the Latin tendere (‘to stretch, extend or proceed,’ as we mentioned above). As for the other meaning of tend, ‘to take care of or look after,’ it is actually older, as it dates back to around the year 1200. The Middle English tenden is a variant of the Middle English atenden, which meant ‘to attend to, or take care of.’ It is a rare example in which both the original verb (now attend) and its variant (tend) have been preserved.

See full definition
Learn more about tend in our forums

Tend in other languages