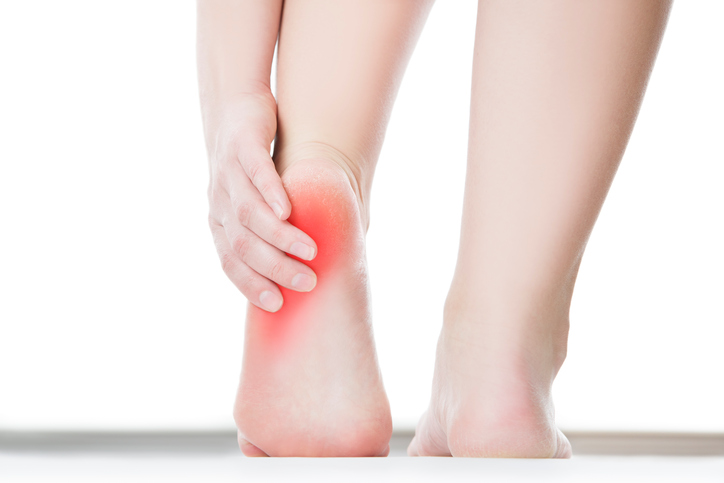 My heel is sore.

The heel is the back part of the foot, below and behind the ankle, and it is the same part on a shoe or sock or anything that covers the foot. It is also a solid, possibly high, base attached to the sole of a shoe. In the plural, heels are women’s shoes with a high base. The heel is also the end part of a loaf of bread and the part of the palm of the hand near the wrist. As a verb, to heel means ‘to add a heel to a shoe’ and also ‘to perform a dance with the heels,’ often in the expression heel and toe. Unrelatedly, to heel means ‘to incline or tilt to one side,’ mainly when we’re talking about ships.

under someone’s heel: subjugated: Example: “The boss has Ian right under his heel.”

bring someone to heel: bring someone into line or subjugate them. Example: “That teacher has done a fine job of bringing her unruly class to heel.”

at someone’s heels: right behind. Example: “The shepherd crossed the field, his dog at his heels.”

take to your heels: run, flee. Example: “The thieves took to their heels when the alarm went off.”

down at heel: shabby, neglected. Example: “The little house had obviously been loved by someone once, but now it was rather down at heel and needed some attention to make it a real home again.”

If you say a person is head over heels, you mean they are head over heels in love (completely and utterly in love). That’s the meaning of the expression in the 1985 Tears for Fears song “Head Over Heels.” You can listen to the song and read the lyrics here:

If you teach your dog to walk to heel or at heel, that means you teach it to walk just behind and very close to you—at your heel. You can use heel as an interjection to tell the dog to do this. Heel can also be used as a verb, meaning ‘to walk to heel.’ Here’s a video with English dog trainer Victoria Stilwell showing you some techniques to train your dog to do this, including using a treat in your hand as a lure to get the dog in the right position:

Heel and toe is a verb to talk about dancing, but in more modern parlance, doing the heel toe is a move in hip hop dancing. You can see how to do it here:

Heel dates back to before the year 850. The Old English hēl(a), pronounced “heel-ah” became the Middle English hēle (pronounced “heel-eh”) before dropping the final e and taking its modern form. It can be traced back to the Proto-Germanic noun hanhilon, and further back to the Proto-Indo-European root kenk- (meaning ‘heel’ or ‘bend of the knee’). It is related to the Dutch hiel, the Old Norse hǣll and the Old Frisian hel. The sense ‘back of a shoe or boot’ dates back to around the year 1400, and it has been used figuratively to mean the bottom or end part of something since the 16th century. The slang meaning for an irresponsible or dishonest person first appeared in the US in the 1910s, and is probably a figurative use of the original meaning, to say that the person is the lowest part possible. The verb, meaning ‘to furnish a shoe or boot with a heel’ comes from the noun, and dates back to around the year 1600. The unrelated verb, meaning ‘to incline to one side,’ dates back to the early 16th century. It was originally a re-spelling of the Middle English hield, which came from the Old English hielden (to incline, lean, or slope). It can be traced back to the Proto-Germanic verb helthijan, and is related to the Middle Dutch helden ‘to lean,’ the Dutch hellen, and the Old Norse hallr ‘inclined,’ and the Old High German halda and German halde ‘slope, declivity.’

See full definition
Learn more about heel in our forums

Heel in other languages