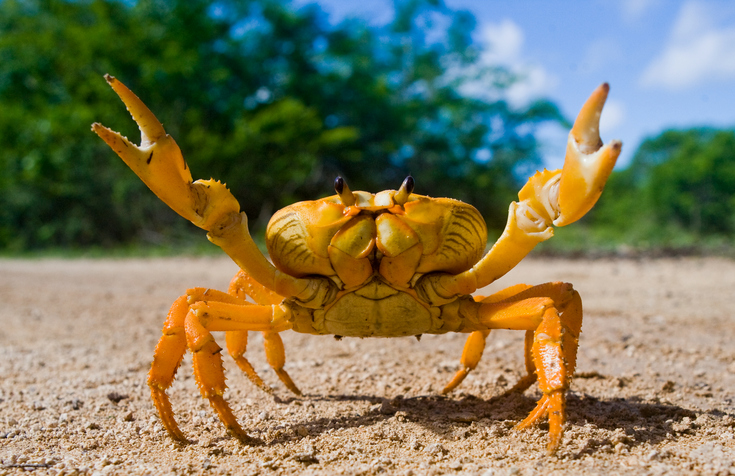 A crab is a crustacean, a sea animal with claws and five pairs of legs, and also the flesh of this animal served as food. As a verb, to crab means ‘to fish for crabs’ and also ‘to move sideways,’ resembling the way these animals move. Unrelatedly, and informally, we call an ill-tempered and unpleasant person a crab, and the related verb means ‘to find fault and complain.’ Mainly in US English, if you crab something, it means that you spoil it, but this meaning isn’t very common.

catch a crab: make a faulty stroke in rowing. Example: “One of the rowers caught a crab and the team lost the race.”

draw the crabs (Australian slang): originally military slang meaning ‘to attract enemy fire,’ this expression is also used figuratively to mean ‘to attract unwanted attention.’ Example: “Don’t say anything to the boss about anomalies in the stock take; we wouldn’t want to draw the crabs.”

The related adjective crabby refers to the meaning of crab as a bad-tempered person. Someone who is crabby is always irritable and complaining. A popular 1990s sitcom (situation comedy) on UK television, One Foot in the Grave, featured a very crabby character named Victor Meldrew. Here is a clip showing Victor getting very crabby when he discovers the young man who delivered a yucca plant to his house earlier in the day misunderstood Victor’s instructions about where to put it:

A crab is also a crab louse—a type of louse that infests pubic hair. They are usually referred to in the plural, as crabs, and are mainly caught through sexual contact.

Crab apples are wild apples, which are more sour than most cultivated varieties, or cultivated varieties that also have a sour taste. It is from this that we get the meaning of crab as an unpleasant person—someone who is sour and bitter like a crab apple. That’s where Edna Krabapple in The Simpsons gets her name, because she is often irritable and crabby, as you can see in this clip (although, in fairness, Principal Skinner is being pretty crabby too).

Crab dates back to before the year 1000. The Old English crabba, later the Middle English crabbe, comes from a Germanic root, though the exact path into English is unknown. It is related to the Dutch krab, the Old High German krebiz, the German Krabbe, and Old Norse krabbi, all meaning ‘crab.’ It can be traced back to the Proto-Indo-European root gerbh-, meaning ‘to scratch or carve,’ and is also related to the English verb carve. Crab, meaning the fruit of the wild apple tree (also called crabapple), dates back to around the year 1300, and its origin is unknown, though it may have come into English from a Scandinavian language (compare with the Swedish krabbäpple). Figurative meanings, most importantly calling an unpleasant person a crab, date to the mid-14th century, and are likely a back-formation from the adjective crabbed, meaning ‘angry or ill-tempered’ (nowadays, crabby is more common). There is some debate as to whether this is because they take a combative stance, like the crustacean, or they are sour, like the fruit. Perhaps there is some truth to both. The verb comes from this use of the noun.

See full definition
Learn more about crab in our forums

Crab in other languages