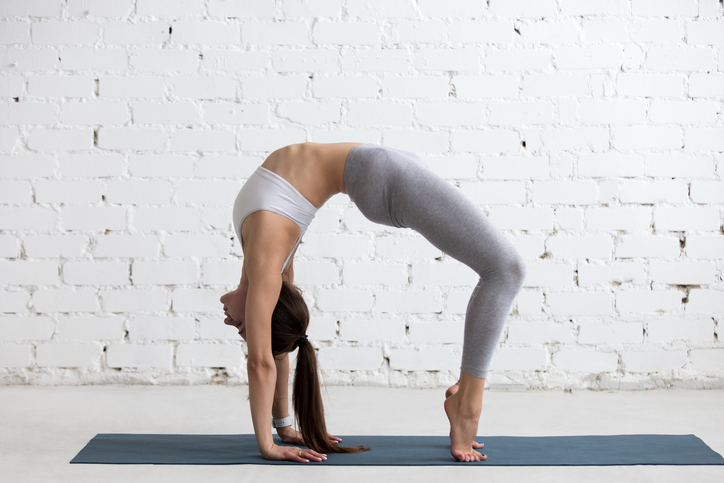 To bend means ‘to force something from a straight to a curved shape’ or ‘to become curved.’ It also means ‘to lean‘ or ‘to turn in a particular direction.’ Figuratively, to bend means ‘to give in or submit to something’ and also ‘to relax and make less harsh.’ As a noun, a bend is both the act of bending and the thing that bends.

bend over backwards: go to a lot of effort. Example: “Janet’s parents bent over backwards to get her into that college and now she doesn’t even want to go!”

bend someone’s ear: talk to someone at length—often about a particular subject. Example: “Is Pete going to be there? I hope he’s not going to bend my ear about that project he’s working on again!”

In the animation series Futurama, there is a robot called Bender who was created to cold-bend steel. Here is a clip from the show where Bender sleepwalks and bends things in his sleep:

Decompression sickness occurs when dissolved gases form bubbles inside the body because someone goes too quickly from a high-pressure environment to one where the pressure is lower (it mainly affects divers). It is also known as the bends because many of the bubbles form in the joints (the parts of the body that bend), causing pain in these areas.

There is also a 2010 movie by M. Night Shyamalan called The Last Airbender, about a being who can bend the four elements—air, water, earth, and fire.

Just to prove that the US and the UK are truly two countries divided by a common language (a quotation attributed to George Bernard Shaw—it means that even though both countries speak English, sometimes regional differences mean we misunderstand each other), there are many references in the movie to characters being benders, which caused a lot of hilarity (that means people found it very funny) among British audiences as bender is an offensive and pejorative slang word for a gay man in UK English, so sentences like “I could tell at once that you were a bender, and that you would realize your destiny” took on a whole new meaning on the other side of the Atlantic.

Bend dates back to before the year 1000, as the Old English verb bendan, which meant ‘to bend or bind’ (usually a bow), or ‘to confine with a string or fetter,’ and later became benden in Middle English before dropping the old verb ending (en). It is a causative form of the verb bindan (to bind), and comes from the Proto-Germanic base band- (string or band), but can be traced all the way back to the Proto-Indo-European root bhendh- (to bind). It is related to the Gothic bindan, the Old High German bintan, the Middle High German benden and the Old Norse benda (to bend), as well as the Old Norse band (band), the Sanskrit badhnati (binds), the Lithuanian bendras (partner) and the Old Persian bandaka- (subject). The modern sense dates back to the early 14th century, and comes from bending a bow to string it. The noun comes from the verb and, meaning ‘a bending or curve,’ dates back to the late 16th century. The sense increased to include ‘a thing of bent shape’ around the year 1600.

See full definition
Learn more about bend in our forums

Bend in other languages