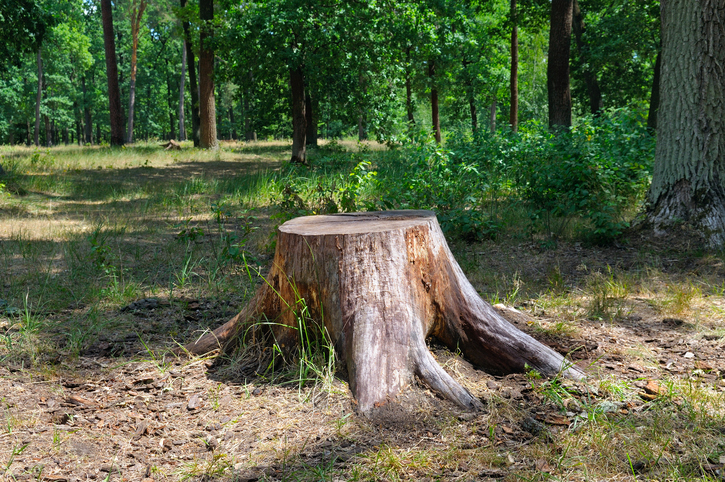 A stump is the lower part of a tree trunk that’s left standing after the upper part is cut down or falls. It’s also the part of a limb of the body (like an arm or leg) that remains after the rest of the limb is cut off. Unrelatedly, in US English, a stump is a campaign tour for political speechmaking. The related verb means ‘to make political campaign speeches.’ To stump also means ‘to leave someone at a loss’ and ‘to walk in a clumsy or heavy way.’

stump up, stump up something (UK, informal): pay, often unwillingly. Example: “Everyone else has paid apart from you, so come on, stump up!”

stump speech: a political campaign speech, especially one made on a campaign tour. “Did you see the candidate’s stump speech yesterday? It was very persuasive.”

Stump is also the name of a drinking game, adapted from a German game called Hammerschlagen. You can see how to play the game here:

(Here at Word of the Day, we’re a little bit worried that playing this game when your coordination is affected by alcohol may be rather dangerous. If you do play, be careful!)

Stumps, usually in the plural, is a colloquial way of referring to human legs—most often in the expression stir your stumps, meaning ‘to get moving or to become active.’ Example: “Come on stir your stumps! This work isn’t going to get done if you spend all day looking at cat videos on the internet.”

Stump comes from the Proto-Germanic root stamp-, and can be traced back to the Proto-Indo European root stebh-, meaning ‘post or stump’ as well as ‘to support.’ It is related to the Old Norse stumpr, the Old High German stumph, and the German stumpf (all meaning ‘stump,’) as well as the German Stummel (piece cut off). As a verb, stump dates back to the early 13th century, when the Middle English stompen or stumpen originally meant ‘to stumble over a tree-stump or another obstacle,’ though this meaning is no longer used. It came back in the late 16th century, meaning ‘to reduce to a stump,’ and ‘to walk around clumsily’ appeared around the year 1600. The figurative sense, meaning ‘to baffle or impede’ is from the early 19th century, and was first used in the US. The US political sense, to go on a speaking tour during a campaign, first appeared in the 1840s, and is derived from the notion of a stump speech, a speech given in a rural area, where sometimes large tree stumps were the perfect platform for the speaker. The noun dates back to the mid-14th century, meaning ‘the remaining part of a severed arm or leg.’ The meaning ‘part of a tree trunk left in the ground’ is from the mid-15th century. The noun has the same origin as the verb, but linguists do not think that it came from the verb. Rather, it has the same origin as the verb. This is because it is found as parts of surnames in texts from the early 13th century, even though the noun itself appeared a bit later.

See full definition
Learn more about stump in our forums

Stump in other languages