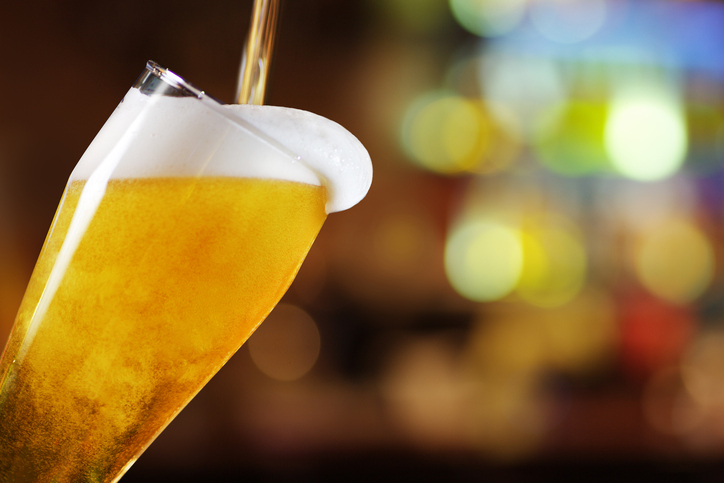 Tilting your glass when pouring beer or sparkling wine helps prevent the drink from frothing up too much.

To tilt means ‘to incline or lean something’ and, figuratively, to tend toward something in terms of your opinion or feelings. Tilt is also ‘to attack with a lance,’ like knights on horseback used to do in olden days. In cinematography, to tilt is ‘to move a camera up or down’ in order to film a moving character or object. As a noun, a tilt is the action of tilting or an inclined position. It’s also a joust or any contest of that sort.

at full tilt: as fast as possible. Example: “The little girl was eager to tell her parents the news, so she ran home at full tilt.”

tilt at windmills: fight imaginary enemies or injustices. The expression comes from Cervantes’ novel Don Quixote (Don Quixote thought the windmills were giants and tried to fight them). Example: “Don’t waste your time tilting at windmills; there are real issues that need to be tackled.”

A tilt or tilt mechanism is also a device on a pinball machine that stops the game if the machine is lifted or tilted in order to prevent people cheating. The Who’s 1969 concept album, the rock opera Tommy, is about a character who cannot hear or talk and is blind but learns to feel vibrations so well that he becomes an expert pinball player. A film of the same name was made in 1975. You can see a clip from the film featuring the song “Pinball Wizard” here:

A tilt is also a cover of coarse cloth or canvas used to protect things from bad weather and, as a verb, to tilt means ‘to protect something with a cover.’

Although jousting and knights in armor are something we associate with times long past, there are still people who like to dress up in armor and hold jousting competitions today. Here is a video showing some modern-day knights tilting at each other:

Tilt dates back to the late 13th century, though the Old English verb tyltan or tealtan (to be unsteady) is derived from a much older adjective, tealt (unsteady). Another Old English verb, tealtian (to totter or amble) is also probably related. The origin can be traced back to the Proto-Germanic word taltaz, and is thought to have come into English through a Scandinavian language. It is related to the Old Norse tyllast (to trip), the Swedish tulta (to waddle), the Norwegian tylta (to walk on tip-toe) and the Middle Dutch touteren (to swing). The Middle English tylten originally meant ‘to upset something or to tumble,’ though this sense was widened to include ‘to lean or incline’ in the early 17th century. The noun comes from the verb, and was first recorded in the 1830s. The other meaning of tilt, a noun meaning ‘a joust or combat,’ dates back to the early 16th century, and possibly comes from the older verb sense ‘to lean’ (because knights lean into an attack). Another theory for its origin is that it comes from the name of the barrier separating the knights in a joust, which in turn may have come from the cloth used to protect things from the weather. In this case, the verb comes from the noun, and first appeared in the late 16th century.

See full definition
Learn more about tilt in our forums

Tilt in other languages