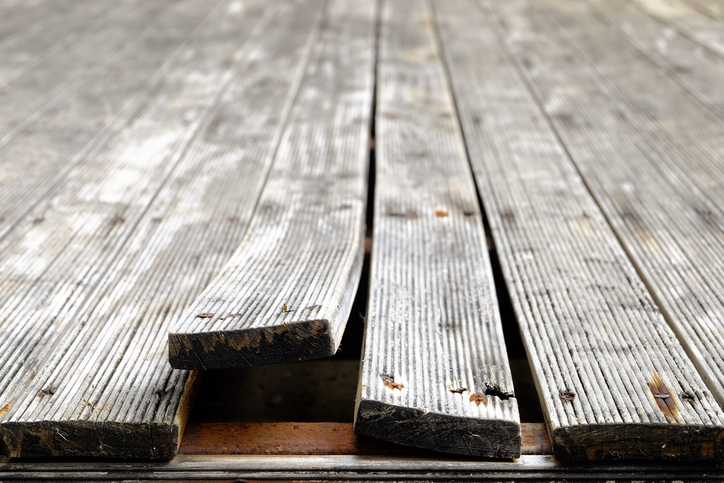 Some of these planks have warped over time.

To warp means ‘to bend or twist out of shape’ or ‘to become twisted or bent.’ Figuratively, it means ‘to distort from the truth’ and also ‘to bend away from what is right.’ As a noun, a warp is a twist on something that used to be flat or straight and, figuratively, a mental twist, a bias, or a moral deviation.

time warp: a time warp is a hypothetical distortion of space-time, which you may encounter in some science fiction novels or movies. This term is also used to describe something or someone which or who appears to exist in a time different from the one they are actually in. Example: “The apartment had been locked up for over fifty years, so when the door was finally opened again, it was like stepping into a time warp.”

“The Time Warp” is also the title of a song from hit musical The Rocky Horror Show. You can listen to the song and join in the dance moves it describes while watching this clip from the movie version The Rocky Horror Picture Show:

Warp is also the word for the lengthwise threads in a piece of weaving.

In science fiction, warp speed is a faster-than-light speed used when a spaceship’s crew wants to travel very quickly. Here is a clip from the 2009 movie Star Trek Edge of Darkness where the Starship Enterprise is pursued and then engaged in battle at warp speed:

Warp dates back to before the year 900, in the form of the Old English verb weorpan (later werpen in Middle English). It originally meant ‘to throw away or hit with a missile,’ and can be traced back to the Proto-Germanic verb verpan (to fling by turning the arm), and further back to the Proto-Indo-European root werp- (to turn, wind or bend). It is related to the Old Saxon werpan and the Old Norse verpa (to throw), to the Swedish värpa (to lay eggs), and to the Old Frisian werpa, the Middle Low German and Dutch werpen, the German werfen, and the Gothic wairpan, all meaning ‘to throw.’ The connection to twisting or bending probably came about due to the movement of the arm when throwing, and the meaning ‘to twist something out of shape’ first appeared around the year 1400. The intransitive sense, ‘to become twisted,’ dates to around the year 1500. The noun also dates back to before the year 900, as the Old English wearp and later the Middle English warpe. We can’t say whether the noun or the verb came first in this case, but we know they both have the same origin. The original meaning, ‘the threads running lengthwise in fabric,’ soon extended to figurative senses, including its use to describe the “fabric” of time and space.

See full definition
Learn more about warp in our forums

Warp in other languages