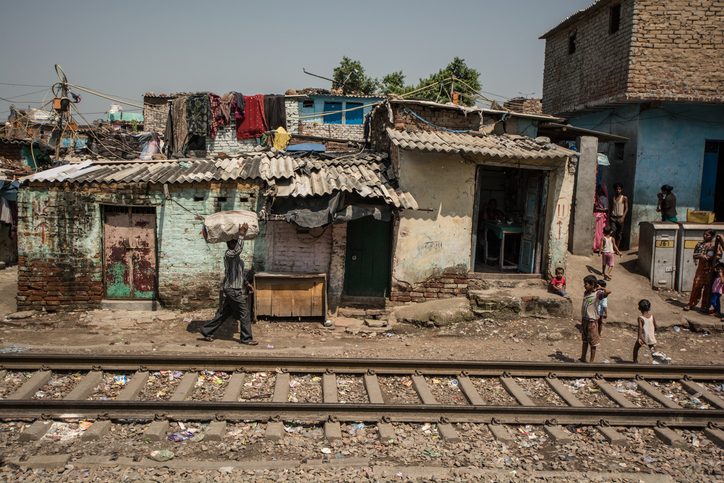 A shanty is a poorly built house or hut and the adjective shanty refers to anything that’s roughly built. More broadly, in US English, it refers to a low economic or social class, but this meaning is pejorative and now dated. Unrelatedly, a shanty is a type of song that sailors used to sing while they worked.

Although sailors no longer sing shanties as they work, sea shanties are an important part of the heritage of traditionally seafaring areas and there are many groups who still keep these songs alive today. In this video clip you can see one such group, the Sheringham Shantymen, singing the popular shanty “Blow the Man Down.”

In Australia and New Zealand, a shanty is a public house (better known as a pub), particularly one that isn’t legally licensed.

Although the terms shanty town and slum both refer to areas with poor and substandard housing, a shanty town is one made up of hastily constructed, makeshift (that means something that will do the job, but perhaps not very well or for very long) dwellings, whereas a slum is an area that may have buildings that were once good, but are now deteriorating.

Shanty, meaning a poorly built house, dates back to the early 18th century, and probably originated in Canada, from the Canadian French noun chantier, which was the name given to a lumber camp (where workers cutting down trees for lumber lived temporarily) and, by extension, a wooden hut or cabin. In turn, chantier comes from the Old French chantier (gantry, yard or depot), and can be traced back to the Latin cant(h)ērus, which meant a ‘rafter or prop,’ but also ‘a horse in poor condition.’ It may even be related to the Greek kanthé̄lios (pack ass). The other meaning of shanty, the type of song, also comes from the French. It dates back to the mid-19th century, and is an alternate spelling of chanty or chantey, an alteration of chantez, the imperative form of the French verb chanter (to sing). It is, of course, related to the English noun and verb chant.

See full definition
Learn more about shanty in our forums

Shanty in other languages