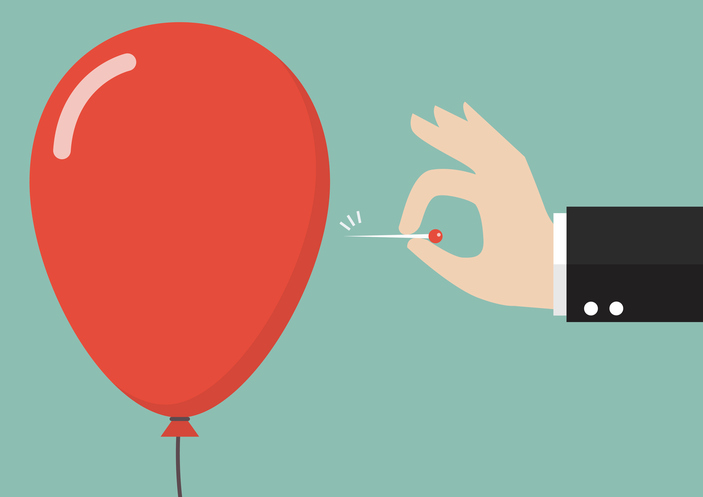 To prick is ‘to pierce or make a puncture,’ with something sharp and tiny, like a needle, and also ‘to cause to feel a sharp pain, as from piercing.’ Figuratively, we use it to talk about mental pain as well. A prick is a small puncture made by a needle or something similar, the sharp pain felt when pricking, and also the act of pricking itself. Vulgarly, a prick is a penis and, informally, we call a nasty and hateful person a prick.

prick up: become or cause to become more erect. Example: “The plant’s leaves were drooping, but they soon pricked up once Karen had watered it.”

prick up your ears: literally, this is used to talk about animals when they hear a noise and their ears point upward as they listen attentively. Figuratively, used about a person, it means to become very alert or attentive. Example: “Patrick’s so ambitious; did you notice the way his ears pricked up as soon as the boss mentioned promotions?”

prick out: to transplant seedlings. Example: “My seeds have germinated, so now I need to prick out the seedlings into individual pots.”

prick-tease: a pejorative, offensive, and vulgar name for a woman (usually) who is considered to lead a guy on (ie, make him think that she is interested in him) but then refuses to sleep with him. Example: “Annoyed that the woman had rejected his advances, Tom called her a prick-tease. Then she told him she would never go out with a man who spoke to her that way.” The term cock-tease means the same thing and is used more often.

Something a lot of people are talking about these days is filter bubbles. Filter bubbles are created by computer algorithms and they tailor what we see online according to things we have already looked at or searched for or liked on our friends’ social media pages. Unfortunately, this means we mainly only see things we like and agree with and are too shielded from opposing points of view and information about things outside our own fields of interest. We need to prick our filter bubbles, like sticking a pin into a balloon, in order to have a more rounded view of the world. Here is a short video telling you about filter bubbles and giving some ideas for how you can prick yours:

A skin prick test is a test to see if someone is allergic to something, by making a series of pricks on their skin to expose them to various substances. This video shows how it works:

Prick dates back to before the year 1000. The Old English verb prician (pronounced prīk-an), which later became priken in Middle English, meant ‘to prick, pierce or sting,’ and probably comes from the West Germanic verb prikojan. It is related to the Low German pricken and the Dutch prikken (to prick), and the Low German verb is probably the origin of some related Scandinavian words, like the Danish prikke (to mark with dots), and the Swedish pricka (to point, prick or mark with dots). The noun comes from the verb, but it also dates back to before the year 1000. The Old English noun prica (pronounced prīk-ah) and the Middle English prikka meant ‘point, puncture, particle, small portion of something, small amount of time, or spot.’ It was first used to refer to a man’s penis around 1590, and you can find some puns using this sense in William Shakespeare’s works. It has been used as an insult since the early 20th century, and the expression prick-tease dates back to the mid-20th century.

See full definition
Learn more about prick in our forums

Prick in other language