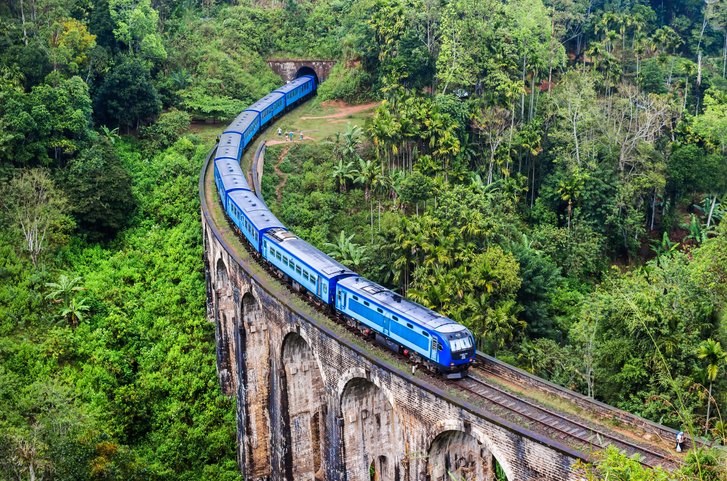 A train is, as you probably know, a group of railroad cars connected together. Figuratively, any line or procession of people or anything drawn along is also called a train. As a verb, to train is to teach and make someone develop behavior, habits, or skills in a particular topic. It also means ‘to become fit by exercising.’ When talking about plants, to train means ‘to make grow in a particular direction by bending or cutting’ and, if talking about guns, cameras, telescopes, or something similar, it means ‘to focus on an object.’

train of thought: succession of ideas. Example: “I was explaining the project to Julie, when I suddenly lost my train of thought and couldn’t remember what I meant to say next.”

The 2011 science-fiction thriller Source Code is about an army captain sent into a computer-generated reality to try to find out who placed a bomb on a train and prevent another similar attack from happening. You can watch the movie trailer here:

When you train somebody, you are instilling a particular kind of behavior in them, like training a dog not to bark all the time or a child to use the toilet, or you are ensuring they have the skills to do a particular thing, like use a piece of software, perform the necessary tasks involved in a job, or know how to play a sport. Although you could almost always use the word teach in place of train, train differs slightly in meaning, in that it is about teaching someone all the skills they need to do or use something, rather than teaching them a particular subject. It would, therefore, be unusual to use train when talking about a specific subject; you wouldn’t usually say that you are training someone in math or English, for example.

Train, as a noun, dates back to the early 14th century, when it originally meant ‘a delay or drawing out.’ By the mid-14th century, it had also come to mean ‘the trailing part of a dress, cloak or skirt,’ and ‘a retinue or procession.’ It comes from the Old French train, which meant ‘track or path,’ and ‘the trail of a gown,’ as well as ‘the act of dragging.’ It is a noun form of the Old French verb trainer, which was ‘to pull, drag or draw.’ It can be traced to the Vulgar Latin verb traginare an extention of another VL verb, tragere (to pull), which is a variation of the Latin verb trahere (to pull or draw). The sense widened to include ‘a procession, series or succession’ in the late 15th century, and the figurative expression train of thought, which plays on this sense, was first recorded in the late 16th century. The most common use we know, ‘a series of cars pulled by a locomotive,’ is an expanded use of the idea of a train of wagons, in this sense (a series or procession), and has been used since the early 19th century. The verb dates back to the mid-14th century, and comes from the noun. Its original meaning was ‘to draw out or manipulate something into a desired form,’ and was mostly used for plants. The meaning expanded in the mid-16th century to include ‘to bring to a desired state through instruction’ (in other words, to teach or discipline), and was a figurative use of the former sense. The sense ‘to make yourself fit through exercise’ is a play on the previous sense, and appeared in the 19th century. The meaning ‘to point or aim’ a camera or firearm is also from the 19th century.

See full definition
Learn more about train in our forums

Train in other languages