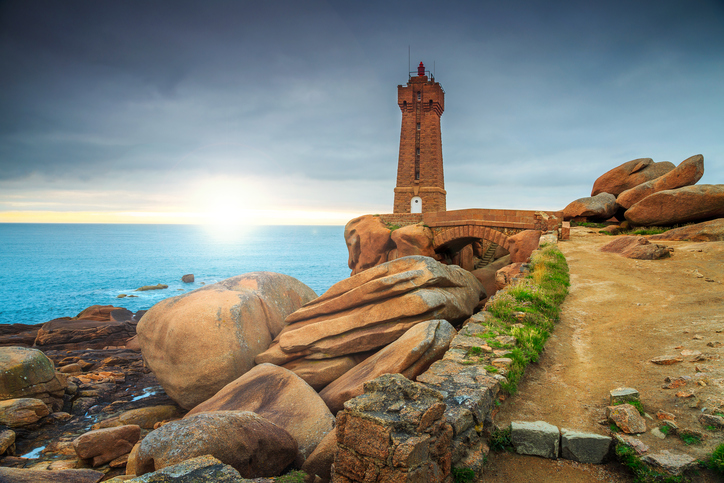 A beacon tower on a coastline

A beacon is a guiding signal, usually a light in a high up position, designed to attract attention or warn people. They were originally large fires used to signal people over long distances in the days before modern communications existed. A tower or hill used for that purpose is also called a beacon and, generally, a lighthouse can be called a beacon as well. Figuratively, a person that inspires or guides others can also be called a beacon. As a verb, to beacon means ‘to provide with beacons.’

radio beacon: a nautical radar device at a fixed location that, upon receiving a radar pulse, transmits a reply pulse that enables the original sender to determine his or her position relative to the fixed location.

Those of you who play Minecraft may know that in this game, a beacon block is a type of block that you can make. It sends a beam of light upward, and can provide status effects to players that come near it. Here’s a video explaining how to create and use them:

In the UK, a Belisha beacon is a flashing light in an orange globe mounted on a post, indicating a pedestrian crossing (crosswalk in US English) on a road.

Some places have the word beacon in their names in the UK, and this is usually because they were places where beacons were lit. They will normally be hills or a group of hills or peaks, like the Brecon Beacons in Wales, a mountain range with six peaks making up part of the Brecon Beacons National Park, which includes three other ranges of mountains and hills. You can learn more about the Brecon Beacons and see some of the scenery in this video:

Be careful not to confuse beacon with beckon, a verb that is related to beacon, and means to summon someone, invite them to approach or follow you using a gesture, or appear attractive or inviting.

Beacon dates back to the early 10th century. The Old English bēacen (pronounced like beacon is now) meant ‘sign or signal,’ though it was also often used figuratively to refer to lighthouses themselves. The spelling changed, in Middle English, to beken, and then again to the form we are familiar with in Modern English. It comes from the West Germanic noun baukna (beacon, signal), and is related to the Old Frisian baken the Old Saxon bokan and Old High German bouhhan, all of which have the same meaning. Some linguists think that it comes from the Latin bucina (‘signal horn’ or ‘crooked horn or trumpet’), but others think it more likely originated in the Proto-Indo-European root bhew-, a variant of bha-, meaning ‘to gleam or shine.’ The figurative sense dates back to around the year 1600. The verb comes from the noun, though the date it started to be used instead of beckon (as this verb’s meaning altered) is uncertain.

See full definition
Learn more about beacon in our forums

Beacon in other languages